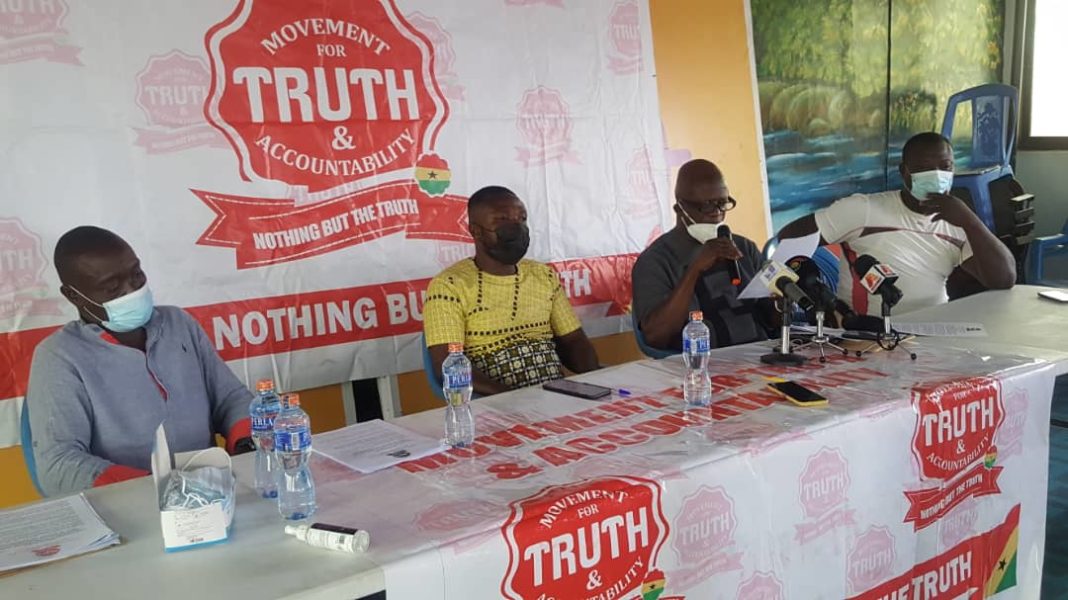 Samuel Bediako middle, and with him is Joseph Bediako and Kwame Ampoful

A group calling itself Movement for Truth and Accountability has called on the Economic and Organised Crime Office, the Ghana Revenue Authority (GRA) and the Financial Intelligence Centre not to shield any company indicted for money laundering and tax evasion.

Samuel Bediako, the communication officer for the group at a press conference said documents available have shown that almost seventy percent of the said indicted companies are believed to be owned by members of The Ruling New Patriotic Party.

He said the group after its first press conference on the exposee , which was later corroborated by the GRA, decided to leave the matter to the investigation bodies to finish with their findings until a group calling itself Import And Export Association came to say GRA has cleared the indicted companies.

Adding that, “if GRA has cleared the companies involved, they should let us know.”

“Another interesting aspect of the money laundering case is that , some bank managers knowing very well that the Import Declaration Form (IDF) which was brought to them from the affected companies were fake , went ahead and transferred the monies , to the foreign accounts of the affected companies, which we have evidence.”

Adding he revealed that the group have decided to forward the evidence to the office of the Special Prosecutor for investigation and prosecution.

“Again, we have the 2019 GRA database at Port of goods these affected companies imported which is lower than the amount they declared.”

Also present at the press conference were Joseph Bediako , conveyer for the group, and Kwame Ampoful secretary.