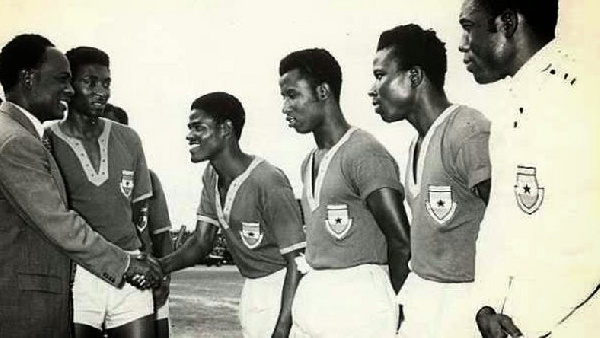 • Kwame Nkrumah was the first President of Ghana

Osagyefo Dr Kwame Nkrumah, the first president of Ghana, besides fighting for and earning the country its independence, led a campaign of a united Africa.

Nkrumah in his quest to unite Africa used the beautiful game of football as one of the main tools and this led to Ghana’s first president investing in the development of the game both at home and across the continent.

In commemoration of his 112th birthday which falls on today, Tuesday, September 21, 2021, we compile five of Nkrumah’s most remarkable contributions to the development of football.

When Dr Kwame Nkrumah appointed Ohene Djan as his Director of Sports on July 1, 1960, he encouraged the veteran football administrator to form a football club which was named Real Republikans also as known as Osagyefo’s Own Club.

As a way to diversify the team’s squad and recruit the best of talents for the club, Ohene Djan, enlisted two of the finest players each from the top teams in Ghana and one each from the middle table teams.

This strategy led to the transfer of Baba Yaro and Dogo Moro, two of the country’s finest sportsmen from Asante Kotoko to Real Republikans. Dodoo Ankra and Addo Odametey were also transferred from Hearts of Oak to join Osagyefo’s Own Club.

The team subsequently contributed 40% of the Black Stars squad that won Ghana the 1963 Africa Cup of Nations (AFCON) hosted by Ghana.

In the final match of the 1963 AFCON against Sudan, Real Republikan players proved phenomenal in the 3 – 0 win as Aggrey Fyn netted the opening goal while Edward Acquah bagged a brace.

Real Republikans would go ahead to win one league title and dominated the FA Cup competition, winning it for an unprecedented four consecutive seasons.

Real Republikans also became the first club to win a double of league and FA Cup in the 1962/1963 season.

Osagyefo Dr Kwame Nkrumah birthed the idea of a single club football competition in Africa which was to be like the European Champions Cup (now UEFA Champions League).

The idea was part of Kwame Nkrumah’s agenda to achieve a United Africa. Osagyefo donated the first ever cup for the African Champions Cup (now the Champions League) with Ghana hosting the maiden edition in 1964-1965.

Nkrumah’s Real Republikans who were champions of Ghana represented the West African state in the competition.

The first trophy presented for the competition named Osagyefo’s Cup was donated by Dr Kwame Nkrumah.

Osagyefo Dr Kwame Nkrumah in 1959 instituted the Gold Cup which became the annual football tournament in the West African sub-region for a period of four years.

Ohene Djan, who was then Chairman of the Ghana Amateur Football Association, in a meeting with Kwame Nkrumah in 1958, announced the Association’s intention to compete in the Olympic Games. Kwame Nkrumah seeing the good in the idea also proposed a regional competition for West Africa, while making a promise that he would donate a gold cup as the trophy for the competition.

Ohene Djan visited Nigeria, Senegal, Guinea, and the Ivory Coast to garner support for the idea, and on Saturday 28th March 1959, at the Ambassador Hotel in Accra, a conference was held with the aim of establishing a West African federation, the main purpose of which was to administer the competition for the Nkrumah Gold Cup.

The conference was opened by Dr Nkrumah himself, and was presided over by Mr Kojo Botsio, president of the G.A.F.A. Ghana was represented by Mr Jellico Quaye and Mr Sam Blankson, as well as Mr Djan and Mr Botsio.

The product of the conference was the establishment of the West African Soccer Federation which Kwame Nkrumah was elected life patron, and Mr Kojo Botsio as president. Mr R.B. Allen of Nigeria and Mr Rito Alcantara of Senegal were named vice presidents, and Mr Ohene Djan was elected secretary-treasurer.

The Association in 1959 organized the maiden edition of the Nkrumah Gold Cup.

The preliminary rounds of the competition were arranged zonally for geographical convenience:

The emerging champions of the four zones were to play in the finals. The tournament was planned to be held biennially, with the first “trial” edition to be held in 1959 with finals in Ghana (these were later delayed until early 1960). The first competition “proper” would take place in 1960 with finals in October in Nigeria to coincide with Nigerian independence.

Fight for African slot in the FIFA World Cup

The Fédération Internationale de Football Association (FIFA) decided that the line-up for the 16-team finals would include 10 teams from Europe, including hosts England, four from Latin America and one from the Central American and Caribbean region.

The decision left only one slot to be fought for by the three remaining continents: Africa, Asia and Oceania.

“Afro-Asian countries struggling through painful expensive qualifying series for ultimate one finalist representation is pathetic and unsound STOP At the worst, Africa should have one finalist STOP Urgent – reconsider.”

His strong objection to FIFA’s decision was influenced by Dr Kwame Nkrumah who had led Ghana in 1957 to achieve independence.

Nkrumah wanted to use football to unite Africa and had told his appointee Djan to do whatever was necessary to put African football on the world map.

This largely led to Africa boycotting the 1996 FIFA World Cup, a decision which compelled FIFA to revise the allocation of slots for the 1970 Mundail.

The Black Stars of Ghana who won three West African championship titles became the first country in the Sub-Saharan Africa region to win the Africa Cup of Nations in 1963 on home soil.

Ghana beat Sudan three goals to nil, through a goal from Aggrey Fyn and a brace from Edward Acquah in the finals to lift the trophy.

The win was boosted Nkrumah’s idea of using football to unite the nation and the African continent and also proved a success to Nkrumah’s investment in the beautiful game.

The 1963 winning team was coached by CK Gyamfi and was captained by Aggrey Fyn of Real Republikans. Ben Kouffie was assistant to the head coach.

The Black Stars after the win in 1963 successfully defended the trophy in 1965 by winning the AFCON hosted in Tunisia.

All these successes were achieved with Ohene Djan executing the vital role of Sports Director in Nkrumah’s government.

Nkrumah achieved his dream of building an all-conquering Black Stars team through the help of Ohene Djan and wrote some of Ghana’s most successful footballing history.