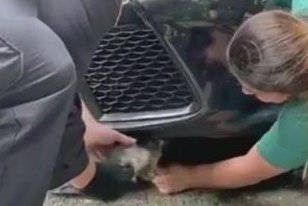 Sept. 20 (UPI) — Police in New York conducted an unusual rescue when a resident called to report a kitten was trapped in the engine compartment of their vehicle.

The Ramapo Police Department said two officers and the city’s dog control officer responded to a Ramapo home on a report of a kitten in distress.

The department posted a video to Facebook showing the officers working from both the top and bottom of the engine compartment to try to retrieve the trapped feline.

“After a lengthy struggle, the officers were able to safely remove the kitten from the car,” the post said.