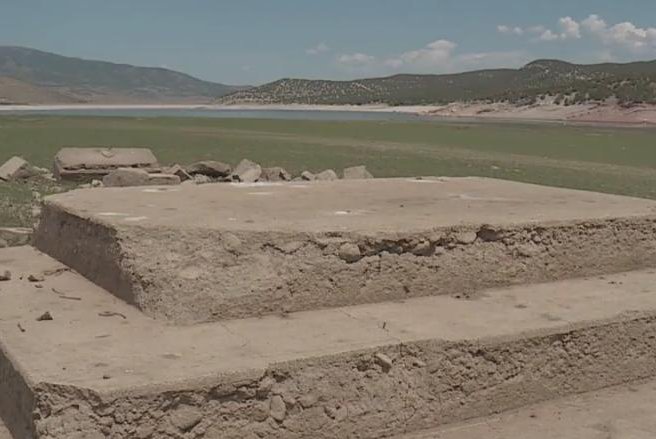 Sept. 20 (UPI) — Drought conditions in a Utah reservoir led to the revealing of an unusual piece of the state’s history — the remnants of a ghost town.

Utah State Parks said Rockport Reservoir, situated at Rockport State Park in Summit County, has receded to 26% capacity, leading remnants of the town of Rockport to emerge from the water for the first time in years.

“It was really interesting to be standing at an overlook for the reservoir and to see faint traces of foundations of old homes and a road all below where the water would normally be,” Devon Dewey, a Utah drone photographer who visited the reservoir, told KSL-TV.

Dewey said the remnants of the former town are clearer from an aerial point of view.

“The whole area is pretty flat and uniform, so even though the foundations are old and mostly gone, you can still see them clearly if you know where to look,” he said. “Using a drone to get a higher perspective helped to see where structures once stood over 70 years ago.”

Utah State Parks said Rockport was settled in 1860, and never quite topped 200 residents before the area was abandoned in the early 1950s for the Wanship Dam project, which created the reservoir.

Rockport Reservoir’s low water levels led officials to close the boat ramp for the summer, and only small boats and personal watercraft are being allowed on the water.