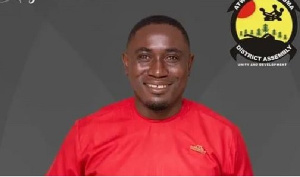 Prince Karikari is a professional teacher

In the Atwima Kwanwoma District in the Ashanti Region, the New Patriotic Party (NPP) Constituency Secretary will have to relinquish his party’s executive position as he heads to the office of the district chief executive (DCE) if Assembly members endorse his nomination.

Prince Karikari is a professional teacher and holds a Bachelor of Education degree from the University of Education, Winneba and currently the District Director of the National Disaster Management Organisation (NADMO) in Atwima Kwanwoma.

He takes over from Nana Okyere Tawiah, who served for four years.

“I thank His Excellency the President for the confidence repose in me, I shall work with everybody especially my MP, Kofi Amankwa-Manu to bring development to the people of Atwima Kwanwoma” he told our reporter.

In the Sekyere Afram Plains District, the Dean of MMDCEs and two-time NPP Parliamentary Candidate Joseph Owusu has also been replaced by Hamidu Suleiman.

Some chief executives, who retained their positions, are Elijah Adansi Bonah for Obuasi Municipal Assembly.

Faustina Amissah continues her work at the Obuasi East Assembly.

Also in the Atwima Nwabiagya Municipal, Michael Awuku Amoah, has been retained.