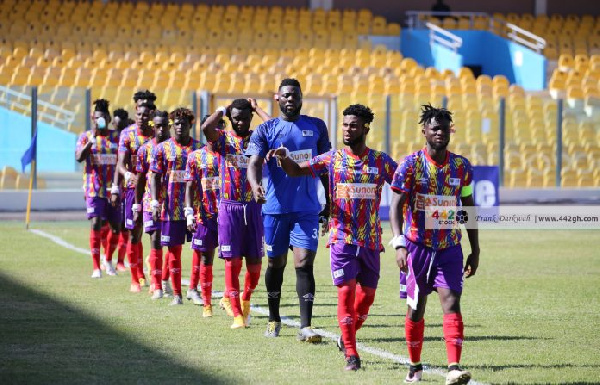 Social media was set ablaze by Ghanaian football fans and journalists after Accra Hearts of Oak’s victory in the preliminary round of the 2020/2021 CAF Champions League.

The Phobians booked their phase in the next phase of the CAF Champions League qualifying round after beating CL Kamsar 2-0 at the Accra Sports Stadium on Sunday, September 19, 2021.

Two late goals from striker Kofi Kordzi and midfielder Salim Adams were enough for the Phobians to beat the Guineas to set up a tie with two times African champions Wydad Casablanca.

The victory on Sunday was well celebrated by Ghanaians as some sports journalists couldn’t hide their admiration for the Accra Hearts of Oak team.

They celebrated Kofi Kordzi’s 83rd free-kick goal as the real deal-breaker for the Phobians at a time when they were drawing the game.

GhanaWeb has compiled some of the reactions on social media for you in the posts below:

I remember calling for water at halftime. Shoutouts to all commentators out there, the job isn’t easy. pic.twitter.com/OVKx9lPand

That is a fabulous free kick from Kofi Kordzi to put Hearts of Oak ahead!! pic.twitter.com/CIVmUDlcpW

Returned to his mother club after spending a year outside.

Samuel Boadu’s tactical substitution did the magic for Hearts of oak. We should keep an eye on this man.

There’s a reason 18% of Hearts of Oak’s 45 goals in the GPL last season came in the last 10 minutes of games. They literally never say die.#CAFCL pic.twitter.com/XcEswISc2v

This boy will do great things…

The passion of @OfficialBoadu and his technical team is soo Infectious!

The belief and hardwork put in,quickly metamorphose into gestures and proper Words of faith anytime there is a moment of excellence.

It appears more of such special moments lie ahead.????#Phobia pic.twitter.com/8Cz0m3bS7F

Had an insightful conversation with my friends @FelixRomark , @jamessowah and @kofi_Bolasie as we thoroughly reviewed @HeartsOfOakGH 2-0 @CiKamsar, and profiled budding Star Salim Adams

Hearts of Oak having fundamental issues in their buildup. Their lack of width means they can’t create overloads like they do in the GPL. Front three too narrow#CAFCL

Hearts qualify to the next stage of the competition. pic.twitter.com/VzOe9mN1QW

To be Honest, the Hearts of oak Jersey is Beautiful than any other Football team Jersey in the World, Look at the Colour Blend, and Combination.

A well fought for victory.

One for you our supporters.

Wydad Casablanca is a big club but Hearts Of Oak is bigger.

▪️Not unveiled by the Hearts of Oak upon his return

▪️Scores in the 83rd; five minutes into his second debut

Phobia has the most tactical brains..