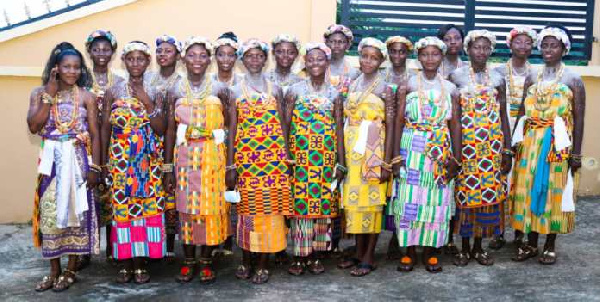 The younger women were initiated into adulthood

As part of the “Homecoming” activities held by the chiefs and people of Ekumfi Abor in the Central Region, from Friday 03 to Sunday 05 September 2021, is “puberty rite” (Bragor in Fante language) to initiate younger women into adulthood.

“Homecoming” is an initiative of the chiefs to bring back home citizens of Ekumfi Abor, far and near, to raise funds to support the developmental agenda of the area, through various activities.

On Friday, eligible younger women of school-going age and particularly Junior High School (JHS) Form 3 leavers dressed in traditional Kente clothes were paraded through the streets of Ekumfi Abor amid drumming and dancing, after being taken through a set of ritual and womanhood lessons for some days.

The newly initiated women were also adorned with jewels, colourful hair scarfs, headgears woven with three hair scarfs, African beads and traditional sandals for the parade, but without their vital statistics showing.

“The ceremonies the younger women went through was in line with the Fante culture, and mark their entry into adulthood. The people of Abor gives prominence to this ceremony because through that the young women are exposed to good morals to help them in their upbringing and adulthood,” says Nana Araba Arhinfuwa III, Queen Mother of the area.

Under the guidance of the newly installed Queen mother of the town Nana Araba Arhinfuwa III working together with the Gyasehemaa Nana Takyie-Enua III and some female elders, the young women who have had their first menstruation and with their virginity intact were brought together and thought the principles and values of womanhood. They were taken through various lessons in life including cultural values, sex education, birth control, women dignity in society, and proper relation with men.

After the street parade, a durbar was held with the chiefs and almost everybody in the community in attendance. Against the background of Fromtonfrom drumming and dancing, the participants took turns to compete on who receives the highest monetary donation from attendees, based on how respectful and popular they are. The top-three winners for this year’s occasion went home with items such as sewing machines, saucepans, and cloths as prizes. Aside this, each participant received an undisclosed gift by the planning committee of the “Homecoming”. In addition, the Chief of the town Nana Amoasi VII and Mr. Albert Abaho who represents indigenes of Ekumfi Abor resident in the United States and the United Kingdom (UK) made pledges for educational support to all participants.

Aside from expecting the younger women to remain virgins prior to the puberty rite, it is taboo for women to get married or pregnant without haven gone through adulthood initiation. This ensures that they grow up as disciplined adults who have control over their sexual orientation, thus staving off early motherhood and unwelcome babies,” Nana Araba Arhinfuwa III, added.

“Ekumfi Abor’s puberty rites are normally held in late August when the annual Akwambo festival is held, but that was not to be because of the Covid-19 pandemic and its related protocols. However, the “Home-coming” as initiated by the chiefs and organized by the Ekumfi Abor Professional Association (EAPA) provided an opportunity for the puberty rite to be held this year, after a two-year suspension,” Ebusuapayin Kobina Abban of Eguana Clan of Ekumfi Abor, said.