Odododiodoo Youth Up In Arms ·Over Accra Mayor Position 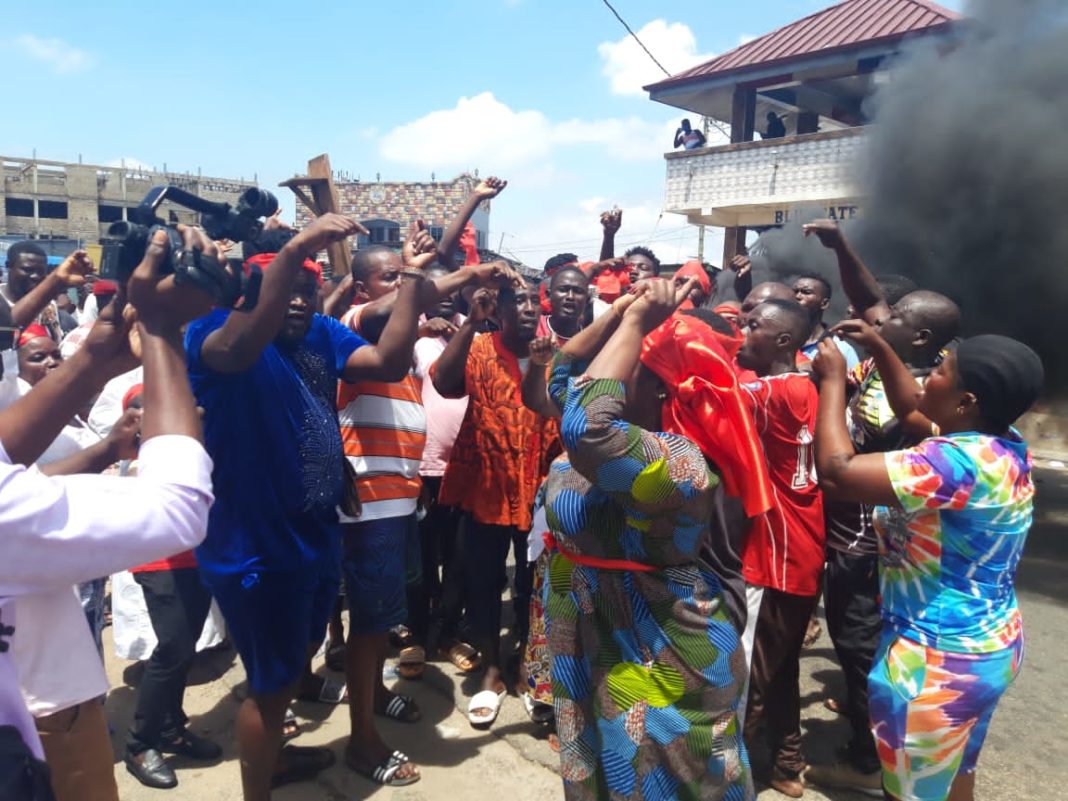 The youth of Odododiodoo, one of the three constituencies that make to the Accra Metropolitan Assembly (AMA) have staged an angry protest over speculations about the supposed appointment of former Deputy Greater Accra Minister,  Elizabeth Kwatsoo Sackey at Metropolitan Chief Executive (MCE).

For close to three hours, the youth, made up of angry members of the governing New Patriotic Party (NPP) and opposition National Democratic Congress (NDC) blocked the Atta Mills High Street which is in the heart of the capital Accra, burning car tyres amid chanting of war songs and shouts of ‘no Adjei Sowah, no vote’ and no Adjei Sowah, no Mayor’.

This was to shore up support for their preferred candidate for position who interestingly is the current and sitting Accra Mayor, Mohammed Nii Adjei Sowah.

According to the youth most of who wore an were clad in red arm and neck bands, they will not accept any appointment short of the mention of Adjei Sowah as Accra Mayor since the rumour mill is awashed with speculation about some persons scheming to have their man removed and replaced with Elizabeth Sackey. 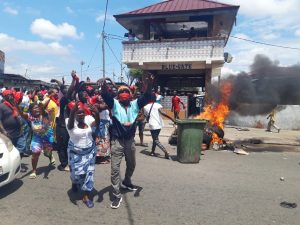 It took the intervention of officers and men from the Jamestown Police to plead with them to stop the burning of the tyres on the road and also to allow traffic flow.

In a statement the Concerned Youth noted “the Accra Metropolitan Assembly arguable is a pulsating heart of the Greater Accra Region and for that matter, it deserves a mastermind who can fix its daily conundrums and deservedly, Mohammed Nii Adjei Sowah fits the bill perfectly in my estimation.”

It said “our effusion about who becomes Mayor of Accra may be coming late in the day but it is important to note that whoever the appointing authority nominates is vested not only with role carved by the local government act that sets it up but also for the politics of it. Men say that a stitch in time saves nine, and so we need to take a thousand stitches today to save nine tomorrow.”

“We have resolved in our thinking and humbly opine that Mohammed Nii Adjei Sowah, the current Mayor of the Accra Metropolitan Assembly would best fit the portfolio and can serve the President’s vision of Accra and that of the people”, they noted, saying “our resolve herein is based on the successes Mohammed Nii Adjei Sowah has chalked in supporting the President’s agenda and vision for the Accra Metropolitan Assembly.

As a true grassroot and a loyalist of the Danquah Busia Dombo tradition, they said Mohammed Nii Adjei Sowah delivered Greater Accra against all odds by winning 21 seats as Regional Secretary in the 2016 elections, a portfolio he had held for two terms running.

They therefore insisted that his appointment and having received a 100% confirmation on 24th March, 2017 did not come as a fluke.

Apart from that, they said “Adjei Sowah has always prioritized sanitation which has long been an issue in Accra, at the nexus of public safety, public health, the informal economy (which employs about 75 percent of Accra’s residents), and emissions contributing to climate change. He’s constantly emphasized inclusivity and equity which  remains as his core of work” and that he “has been aligned to Accra’s development and budget framework to the Sustainable Development Goals (SDGs) that has helped to maintain principles amid this COVID-19 pandemic.

Under his tenure, the youth said Accra has committed to publishing a Voluntary Local Review (VLR) to report on the progress towards equity and sustainability which is first of a kind.

“Because of his all embracing attitude and staunch believer of traditional values, he has built an enviable rapport with the traditional authorities in Ga and has always championed development in diverse ways”, they stated.

For them, it therefore not come as a surprise when the Ga Traditional Council petitioned the President to consider the renomination of Mohammed Nii Adjei Sowah.

“We strongly admire the tactful contributions during the just ended 2020 election. In spite of his ill health during that period, he never reneged on sitting at the table to draw strategies and to show the way during the electioneering period. Indeed, Mohammed Nii Adjei Sowah is a masterpiece and we are fortunate to have him”, they noted, whilst stating with emphasis “ as a group, our interest is not to question or rundown the competencies of the other aspirants in this contest but it is proper to know who and what they are bringing to the table. We are not looking forward to an armchair Mayor or one that will only be a puppet and to succumb to the whims and caprices of some selfish party elders within Greater Accra Region.”

“We want a leader who will be at the beck and call for all manner of person irrespective of the Party coloring.

We want a leader who is firm, courageous and up to task for the job ahead.

We want a leading who can lead us to break the eight as espoused by all party faithful. If all of these are anything to go by then, our surest bet to envisioning this vision can be possible only through the leadership of Hon. Mohammed Nii Adjei Sowah.

Its Mohammed Nii Adjei Sowah we know and it him we know can lead and deliver the daunting task ahead”, they insisted.