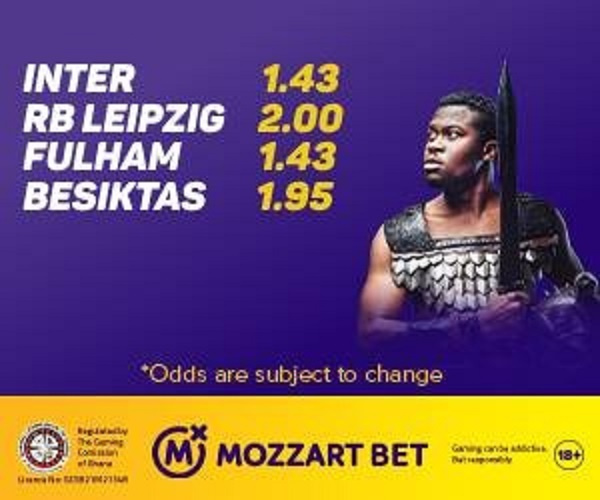 MozzartBet is regulated by the Gaming Commission of Ghana

With the weekend again here with us, Mozzart Bet is offering its players the highest odds in four Saturday games including Inter Milan vs Bologna and RB Leipzig vs Klon.

Despite losing Romelu Lukaku to Chelsea, Inter Milan have been free-scoring, netting at least two goals in each of their last eight Serie A matches.

Inter Milan have made the San Siro a fortress in recent times winning each of their last 17 Serie A home league games.

The reigning Serie A champions have a good record against Bologna having done the double over them last season and have won 18 games against the same opposition.

RB Leipzig will be looking to get back to winning ways following their humbling 6-3 defeat at the hands of Manchester City in the Champions League last time out.

The Bundesliga runners up from last season will look up to Christopher Nkunku for inspiration after scoring a Champions League hat-trick in the defeat to City.

RB Leipzig will look to turn their season around after a tough start to the Bundesliga having won once and lost on three occasions.

Top of the Championship table, Fulham take on Reading brimming with confidence after opening the campaign with five wins, a draw and a loss.

Aleksandar Mitrović has been in hot goalscoring form having scored six goals for Fulham this season and will be eager to add onto his tally against Reading.

Reading have failed to win nine of their last away games and have suffered four straight away loses which should make Fulham favorites in the match.

Besiktas have begun their domestic season with a bang and are already top of the table following an unbeaten start.

The reigning Turkish champions are now seeking a fourth consecutive league win when they come up against Antalyaspor.

Antalyaspor have a poor head-to-head record against Besiktas having lost 33 times against the Istanbul giants and have only won on six occasions.

MozzartBet is regulated by the Gaming Commission of Ghana. Restricted to persons 18 years and above.

Bet responsibly. Betting can be addictive.