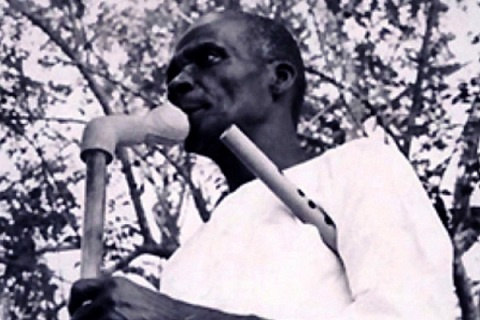 Ephraim Amu is the composer of ‘Yen Ara Asase Ni’

Ghanaians have been urged to let the musical compositions of the late African music and culture legend, Dr. Ephraim Amu, stimulate their sense of patriotism and citizenship towards national development.

According to speakers at a virtual forum held on Thursday, his most popular national functions song, “Yɛn Ara Asase Ni”(This is our own land) which rallied all to support nation-building was still relevant.

The speakers were Reverend Professor Philip Laryea, a Professor of African Theology and Dean of Accredited Studies at the Akrofi-Christaller Institute, Akropong – Akuapem; Prof. Daniel Avorgbedor and Prof. Esi Sutherland-Addy, both of the Institute of African Studies(IAS), University of Ghana.

The event held to celebrate the 122nd anniversary of the birth of Dr. Amu, formed part of the Institute of African Studies Seminar Series which aimed to celebrate literary icons and works.

Organized by IAS in collaboration with the Ephraim Amu Foundation and interlaced with songs by Dr. Amu, it was on the theme “Yɛn Ara Asase Ni’: Revisiting Dr. Ephraim Amu’s Ideals on Patriotism and Nation Building.”

The late Dr. Amu was born on September 13, 1899, at Peki-Avetile in the Volta Region and passed away on January 2, 1995, aged 95. He was a theologian, prolific composer, and music teacher with numerous compositions.

Amu is particularly known for his use of the “atenteben”, a traditional Ghanaian bamboo flute. The University of Ghana on, March 27, 1965, conferred the honorary degree of Doctor of on him.

Giving the history of “Yɛn Ara Asase Ni”, Prof. Laryea, said it was originally composed in 1929 in Eve (Peki dialect) as “Amewo dzife yigba” and translated in Ga and Dagbani.

He said although the translation into Akan varied some of the lyrics, the spirit of the song, and its call for national unity and teamwork to build the country should not be lost on Ghanaians.

He said the country needed more citizens to be patriotic and build on the legacy of the forebearers who struggled against all odds for the sake of generations unborn.

Prof. Laryea said it was the responsibility of the current generation to play their part in moving the country forward and inculcate in the young ones the virtues of patriotism to carry on the task.

Prof. Avorgbedor said the ace composer had left behind numerous thought-provoking works which were being assembled under a project aimed to immortalize his legacy.

He described Dr. Amu as an embodiment of significant knowledge and wisdom and cultural heritage, whose “lifetime advocacy for unity among all people goes far beyond what is recorded.”

On her part, Prof. Sutherland-Addy said there was the need to imbibe in the young generation the virtues of nationalism and help them live an upright life that would position them as dependable future leaders.

She said keeping the works of the likes of Dr. Amu alive was critical to the survival of the nation’s heritage since they do not only prick the conscience of people but promote unity and culture.