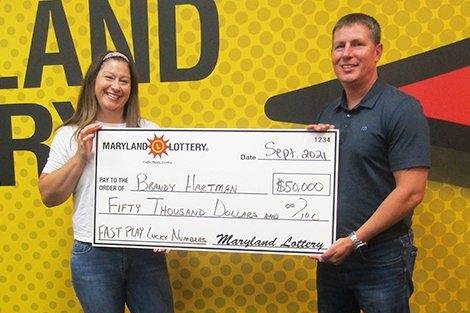 Sept. 16 (UPI) — A Maryland woman said the arrival of her paycheck and a near-empty gas tank led to her winning a $50,000 lottery prize.

Brandy Hartman of Aberdeen told Maryland Lottery officials she and her husband stopped at the Royal Farms store in Aberdeen to fill up their gas tank, and while inside the store she decided to spend some of the paycheck she just received to play lottery games.

“I feel the urge to get a ticket or two around payday,” Hartman said.

Hartman said she gravitated toward the Fast Play games, which offer the chance to win instantly.

“These last couple of years, I’ve picked a Fast Play game when playing,” she said. “I like knowing if I won right away.”

“The first didn’t get me anything, the second $10 and, with the winnings, I bought one more,” she said.

The player said she was in disbelief when she saw the third ticket had earned her a $50,000 jackpot. She said her husband also required some convincing.

“I was sick to my stomach and shaking from the shock. I showed him outside at the car and he studied it over and over. Then, he looked up and smiled,” Hartman recalled.

Hartman said her winnings will go into the bank as savings for her daughter’s education.