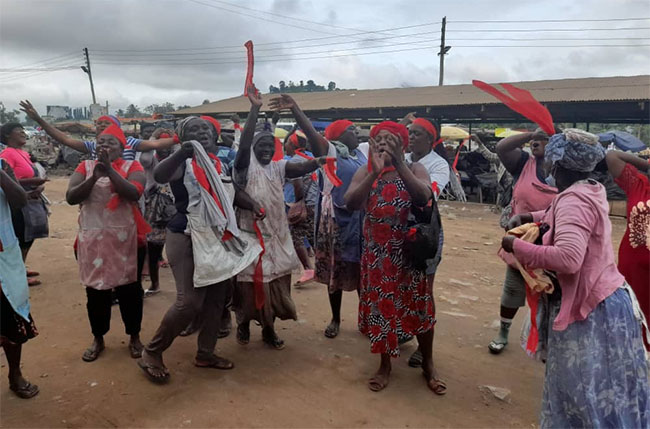 The bread sellers embarking on the protest

The Bread sellers and bakers in the Nsawam/Adoagyiri Municipality of the Eastern Region on Friday staged a protest along the Accra- Kumasi Highway calling on President Akufo-Addo to nominate Emmanuel Owusu Arthur as Municipal Chief Executive (MCE) for the area.

According to the Bread sellers in a petition which has already been sent to the President, signed by the Association Queen, Akosua Adutwumwaa, the nominee recommended by the Committee is humble and hardworking which implies that he can work hand in hand with the Member of Parliament (MP) for the area, Frank Annoh-Dompreh.

“Mr. President, we know that you listen to the government in Jesus’ name. We end here with more peace, may God richly bless you in abundance to help you rule the county. Amen.

“We hope our request will be granted in good faith” the petition said.

Already the chiefs and the executive of the New Patriotic Party (NPP) in the constituency have welcomed the alleged report by the Dan Botwe Committee to the President for recommending Emmanuel Owusu, as the Municipal Chief Executive (MCE) for the Municipality.

According to them, they believe he will greatly assist to develop the municipality and also improve the livelihoods of residents.

The Gyasehene of Sakyikrom, Nana Owusu Aduomi ll, explained that they have observed that Emmanuel Owusu has what it takes to be a leader.

The Abotendomehene of Sakyikrom, Nana Kwame Addo I, added that Mr. Owusu had a good working relationship with the MP when he served as the treasurer and has also demonstrated a high sense of belongingness and dedication to the Nsawam Adoagyiri municipality.

The Party, that’s twelve out of the 16 NPP constituency executives have also petitioned the Presidency to replace the incumbent MCE.

In their statement, they said, “We humbly suggest you consider Mr. Emmanuel Owusu, the current constituency treasurer for the Municipal Chief Executive position.”

According to them, Mr. Owusu has served the party in the constituency in various ways, adding that he is a true patriot, having worked as a polling station secretary and risen through the party structures to become the constituency treasurer.

They noted that his administrative acumen has helped to manage and put things in order at the party office in Nsawam.

They indicated that they have gathered that some people are working behind the scenes to get the acting MCE, Isaac Kwadwo Buabeng renominated, which they cautioned would further deepen the woes and destroy the chances of the party in future elections if that decision is taken.

The expected number of votes was reduced through the actions and inactions of our current MCE, they alleged.

“We shall be highly disappointed in the President if he re-appoints him and we want to state that we cannot guarantee the success of the party in future elections if this happens” the party stated in its petition.

Meanwhile, some of the assembly members have also rejected the decision of reappointing the acting MCE since his relationship with them at the Assembly is very poor.