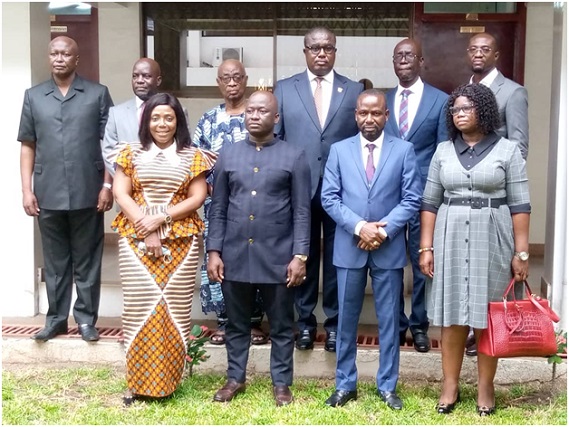 Members of the governing board

MINISTER OF Transport, Kwaku Ofori Asiamah, has charged the governing board of Metro Mass Transit Limited (MMTL) to introduce innovative measures that will help turn around the transport company.

According to the Minister, the challenges confronting the transport company were enormous and would require wise counselling from the board, team work and experience to address these.

The Minister, who disclosed this in a speech read on his behalf during the inauguration of a nine-member governing board for MMTL Tuesday in Accra, tasked the board to take up the challenge and ensure that the operations of the transport company were boosted.

“Over the years, the company has gone through several challenges, including the drastic reduction in operational fleet, frequent breakdowns and rising operational cost. It is our expectation that the new board will take up this challenge to ensure that the company is revived to the level of winning back its share of the market and expand its services,” he noted.

The Minister also entreated the board to work in unison with management of the company to address the increasing number of agitations among MMTL’s workforce and ensure that industrial harmony prevails, stressing that “these agitations if not addressed could potentially derail the ongoing efforts.”

Mr. Asiamah said the Ministry, between 2018 and 2019, supported the MMTL with a total of 100 new intercity buses to revamp operations. He added that the ministry was pursuing other arrangements to bring in more buses to augment the fleet.

Chairman of the board, Hon. Marfo, reacting to the gesture, said “We promise work in unison with all stakeholders of the company including the government as a hole, the Ministry of Transport, shareholders, employees, passengers among others to lift up the company to its rightful place.”