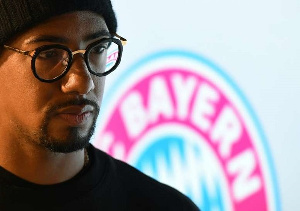 Former Germany and Bayern Munich defender, Jerome Boateng has decided to appeal his sentence on charges of domestic violence

The German was sentenced to pay his ex-girlfriend €1.8m in damages last week after a Munich court found him guilty of voluntary hits and injuries.

The former Bayern Munich’s man intention to appeal the decision was confirmed by his lawyer to German news agency SID.

The public prosecutor’s office and the accessory prosecution also filed an appeal, according to the information. This means that the next instance, the Munich I Regional Court, will have to negotiate the case again.

The district court had sentenced the 33-year-old Boateng last week to pay a fine of 1.8 million euros for assaulting his former girlfriend. It imposed a fine of 60 daily rates of 30,000 euros each.

The judge saw it as proven that Boateng had hit his then partner in the face during a Caribbean vacation in 2018. 30,000 euros is the highest possible daily rate, but Boateng does not have a criminal record. A criminal record is only available from 90 daily rates.

The public prosecutor’s office had demanded a suspended sentence of one and a half years – and a monetary requirement of 1.5 million euros. Boateng’s then defender Kai Walden had demanded an acquittal.

The ex-national player has already been confronted several times with allegations of physical injury, abuse of power and bullying. Probably the most violent case concerned the suicide of his ex-girlfriend, the model Katarzyna “Kasia” Lenhardt. Her mother had disclosed messages, chats and videos in “Spiegel” in which Lenhardt describes a hate campaign directed by Boateng against her.

In the current case, the prosecution accused Boateng of attacking his ex-partner in July 2018 while on vacation on the Turks and Caicos Islands in the Caribbean. Accordingly, he is said to have beaten her, punched her, bitten her in the head, thrown her on the floor and violently insulted her. The ex-girlfriend described it as a joint plaintiff in a similar way. The allegations were of insult and bodily harm, the public prosecutor’s office even assumed dangerous bodily harm in their closing argument.

The court, on the other hand, only accepted “a punch” in the face. Boateng, who recently signed in Lyon, denied the allegations. He admitted in court that there was an escalation in the Caribbean luxury complex with a private pool and staff. He emphasized that he had never beaten his ex-girlfriend.

According to their information, the two have had an “on-off relationship” since 2007, and since 2015 they have been arguing in front of the family court about the right to determine the residence of their children.