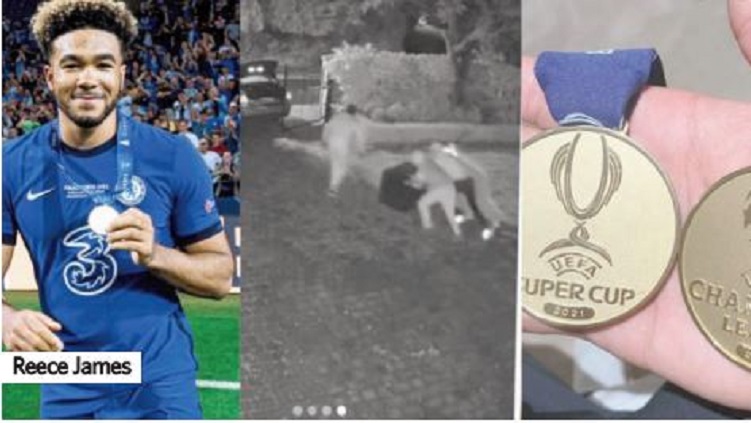 Chelsea and England star, Reece James, has shared shocking footage of a gang of ‘cowardly robbers’ breaking into his house and stealing a safe containing his Champions League (CL) and England medals.

James, 21, was playing for Chelsea at Stamford Bridge on Tuesday evening when the gang broke into his £2.5 million house in north Surrey, which was empty at the time.

He posted footage of the gang on Instagram which shows them coming through a gate and forcing their way inside before escaping with a heavy safe.

One clip shows some of the thieves struggling to move the safe while others struggle to open the gates of the footballer’s home.

Eventually, they managed to do both things and load the safe into the back of a getaway car.

James revealed that his Champions League winners medal, his Euro 2020 final medal and Super Cup winners medal were all in the safe that was taken.

It is not the first time he has fallen victim to thieves after some broke into his car to steal presents he was planning to hand to hungry children in December.

It is unknown how much a Champions League medal is worth – though former Liverpool star Steve Finnan auctioned his 2005 winner’s medal for £10,000 – £15,000 last year.

Speaking about the break-in, James wrote on Instagram: “On the evening of the 14th of September 2021 when I was playing for my club in the return of the Champions League, a group of cowardly robbers broke into my house.

“They managed to collectively lift a heavy safe containing some personal items of mine into their car.”