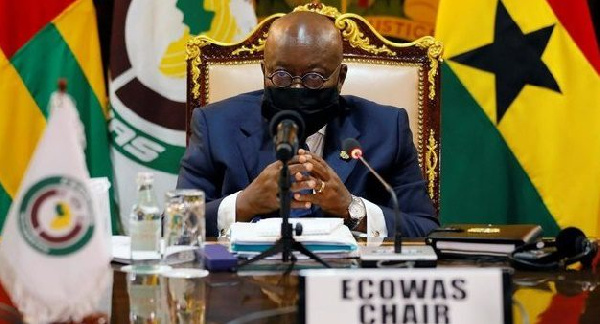 Ghana has been a permanent figure in the ongoing political crisis in Guinea since the September 5 overthrow and dissolution of the government of detained Guinean president Alpha Conde.

Ghana’s role has largely been due to the fact that President Nana Addo Dankwa Akufo-Addo is Chairman of the regional bloc, the Economic Community of West African States, ECOWAS.

Over the past two weeks, Ghana has hosted two extraordinary summits of ECOWAS Heads of State over the crisis and our Foreign Minister has led a delegation to Conakry.

GhanaWeb maps the role that Accra has and continues to play in ensuring a return to democratic normalcy in Conakry.

President Akufo-Addo hosted about a dozen colleague Heads of State and Government in Accra for talks on the crisis in Guinea and also Mali – the latter has experienced two coups in under a year.

The talks condemned the coup that overthrew Alpha Conde, called for his release and demanded that the military junta led by Lieutenant Colonel Mamady Doumbouya, undertakes a six-month transition to civilian rule.

“We have met with him, he looks very well,” Ghana’s Foreign Minister Shirley Ayorkor Botchwey told reporters in Conakry after meeting with Conde and coup leader Mamady Doumbouya.

“Nothing has been discussed yet. What we were asked to do was to come and engage, which we have. After which we will go back and report to the heads of state,” she added.

Conde was last seen in the company of soldiers who arrested him and took him to an undisclosed location. ECOWAS leaders after a virtual on September 8 dispatched three Foreign Ministers to Conakry to engage with all stakeholders.

The three included Ayorkor Botchwey as leader of the delegation of Foreign Minister, Alpha Barry of Burkina Faso and Prof Robert Dussey of Togo as well as ECOWAS Commission President Jean-Claude Kassi Brou, was also part of the delegation.

The extraordinary virtual summit was called by Akufo-Addo three days after the coup took place. It started with a condemnation of the coup and the decision to send the three-member delegation to meet with the ousted president and the military junta.

But more importantly, it was after this summit that Guinea was officially suspended from the bloc. The African Union followed suit the following day with a similar measure.

Barely hours after it emerged that the military had dissolved the government and taken over the reins, president Akufo-Addo issued a statement as follows:

“ECOWAS notes with great concern the recent political developments which have occurred in Conakry, capital of the Republic of Guinea. ECOWAS condemns unreservedly the attempted coup of Sunday, September 5, 2021.

“ECOWAS demands respect for the physical safety of the President of the Republic, Professor Alpha Condé, and his immediate and unconditional release, as well as that of all arrested persons. ECOWAS also demands a return to constitutional order on pain of sanctions.

President of the Republic of Ghana and

Current Chairperson of the ECOWAS Authority