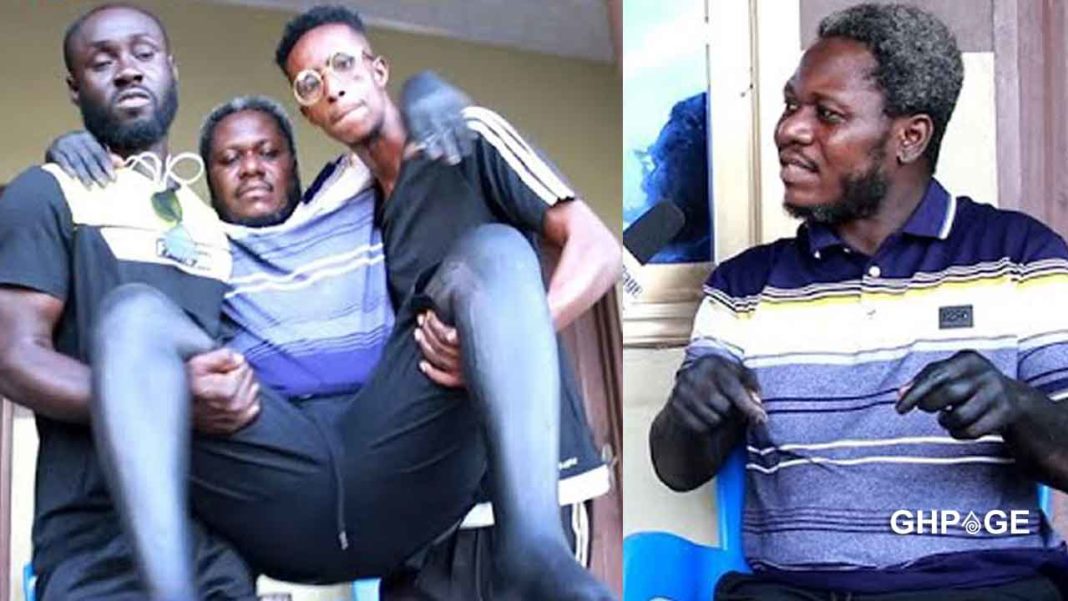 One of Kumawood’s finest Movie Directors, Frank Fiifi Gharbin has revealed how he got crippled which has rendered him bed-ridded for about one month 2 weeks.

News about Frank went viral in the last 24 hours, a video to this effect surfaced on social media. In the video, the movie director looked helpless and was carried by some young men to a cab.

Ghpage TV led by Rashad Kojo Emmanuel alarmed by the viral video of the Skilled Movie Director has granted an interview with him to narrate how he found himself in this uncomfortable condition.

Telling his sad story, Director One said he woke up one day and felt a sharp pain in both legs. He tried moving them but he couldn’t. Thinking it’s one of those bodily pains, he applied balm on it but it got worse by day.

The legs started swelling up. Terrified by that he went to the hospital 3 days after he felt sharp pains in the legs. But he was given malaria medications upon diagnosis at the hospital. Mr Frank said all this while he couldn’t walk.

After trying several hospitals and undergoing many medical examinations, the ‘Black Monday’ movie director told the host, Rashad, that his condition rather worsened. He could barely walk. He can only go out when carried.

Watch the video below- Frank Fiifi Gharbin’s Interview with GhpageTV;

Frank Gharbin popular in the Movie circle as ‘Director One’ is currently at Dr Kodua Spiritual and Herbal Center in Kumasi where he is receiving both herbal and spiritual treatment.