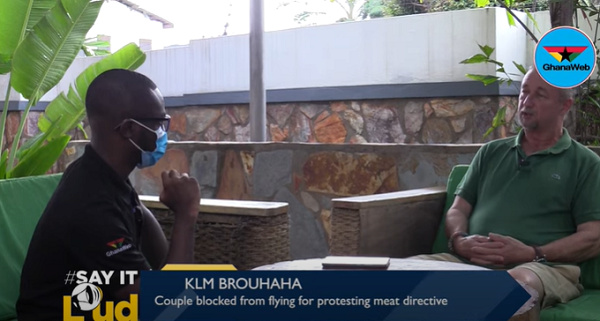 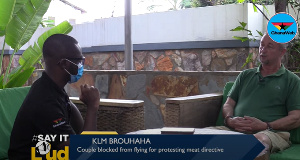 News of their directive to serve only vegetarian dishes on their in-flight meals from Africa has not been received well by passengers who widely patronise them.

Popular airline KLM a few weeks ago decided to take off meat from their meals, according to Dutch National daily Telegraaf as cited by paliparan.com and other online portals.

A Ghanaian couple based in the Netherlands who had heard and read about this decided to raise objections to this because meat is a ‘whole mood’ in their home country too.

Like Argentina and Texas, they wanted Ghana to be added to the list of countries omitted from KLM’s meatless dish flights.

They shared pamphlets and displayed a banner to drive home their point at the Kotoka International Airport on the night of Wednesday, September 15 before their flight.

But this did not go down well with the KLM crew.

“We were asked if we were the ones spreading lies about KLM,” Nico van Staalduinen who’s married to a Ghanaian wife narrated to Laud Harris Adu-Asare on #SayItLoud.

What was supposed to be an intervention ended up with them ‘kicked’ out of the plane and missing their flight entirely.

Watch a narration of how it all went down in the video below: