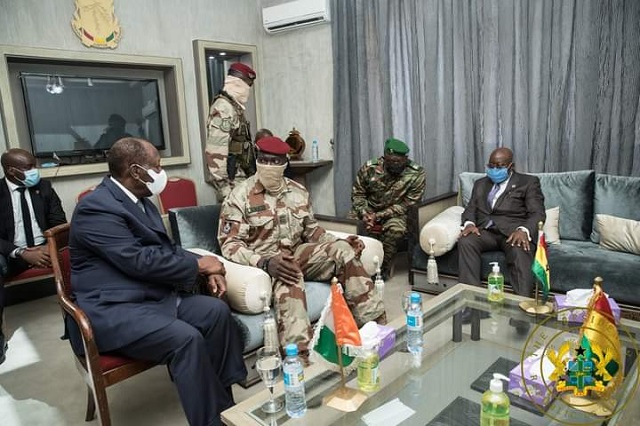 President Nana Addo Dankwa Akufo-Addo is currently in Conakry, the capital of Guinea, in his capacity as Chairperson of the Authority of Heads of State of ECOWAS, to hold talks with the military leadership in Guinea, led by Colonel Mamadi Doumbouya.

The meeting will be centered largely on the fate of President Alpha Condé, amongst others.

The President left Ghana together with the President of the Republic of Côte d’Ivoire, Alassane Ouattara to personally convey the decisions of the Authority of Heads of State and Government of the Economic Community of West African States (ECOWAS) to the interim leader.

Guinea, together with Mali, have been under the bloc’s sanctions as a result of military takeovers.

In Mali, the National Committee for the Salvation of the People led by Col Malick Diaw and Gen Sadio Camara on Tuesday, August 18, 2020 seized power by forcing President Ibrahim Boubacar Keïta to resign. 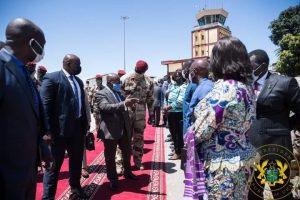 Mr Keïta had won a second term in elections in 2018 but there had been anger over corruption, the mismanagement of the economy and a dispute over legislative elections, prompting several large protests in the country.

An interim president, Bah Ndaw, and Prime Minister, Moctar Ouane, were put in charge awaiting the transition to constitutional rule but were also ousted by a second coup on Tuesday, May 25 led by Colonel Assimi Goïta.

The country was sanctioned by Ecowas and are scheduled to  hold elections in February next year to return to constitutional rule. 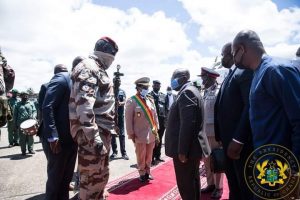 In Guinea, President Alpha Conde’s government was overthrown on Sunday, September 5 by members of the Special Forces of Guinea, led by Colonel Mamady Doumbouya, who has now formed the National Committee for Reconciliation and Development (CNRD).

But an emergency summit of Ecowas’ highest organ in Accra on Thursday, September 16 imposed sanctions on junta members in both Guinea and Mali.

They as well as their family members have been banned from travelling and their financial assets have been frozen.

This has been communicated to international bodies like AU, UN, EU and other bilateral bodies. 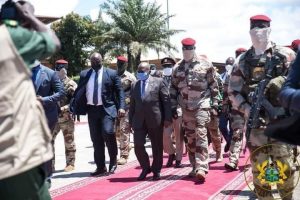 A decision was taken for the Chair of the Authority to personally travel to Conakry to convey the messages to the military leaders.

“[The heads of state] also, of course, reaffirmed ECOWAS’ firm commitment to work and help Guinea in this process of restoring the constitutional order.

“They insisted also on the close support of traditional partner the United Nations, the African Union, European Union and also other bilateral countries and they also decided that there will be a visit by the Chair of the Authority to the Republic of Guinea as soon as possible to convey those messages regarding the decision of the Summit personally.”