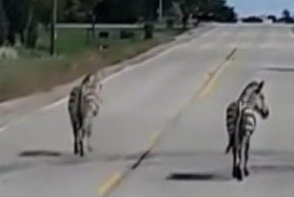 Sept. 16 (UPI) — Sheriff’s deputies in Wisconsin responded to an unusual situation when multiple 911 callers reported a pair of loose zebras walking down the middle of a road.

The Outagamie County Sheriff’s Office said the two zebras were rounded up after being spotted on a Seymour-area road.

David Haupt, one of the 911 callers, captured video when he spotted the two African equines walking down the middle of a road just outside of the city.

“They were off in the distance. As I got closer, they looked like horses, and I got closer, and I happened to be talking to somebody on my headset, and I’m like, ‘I think I see a zebra,’ and they were like, ‘no way.’ I’m like, ‘nope, those are zebras,'” Haupt told WBAY-TV.

Haupt said the zebras appeared to be friendly when he got out of his vehicle and guided them from the road to a nearby open field.

Deputies soon arrived on the scene.

“Well, it’s not the first exotic animal call ever we’ve gotten. Every once in a while, you get something different, but, yeah, having a garbage truck driver call you and say, ‘well, there’s two zebras in the road,’ is a bit unusual,” sheriff’s Sgt. Nathan Borman said.

The zebra escape took place about a week after multiple zebras escaped from a Maryland property in the Washington, D.C., area. Officials are still trying to capture the Maryland zebras.