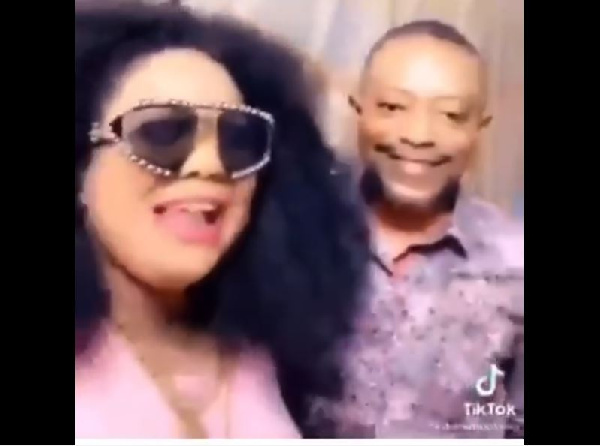 The past few days for the founder and leader of leader of Glorious Word Power Ministry, Reverend Isaac Owusu Bempah must have been pretty hard, following his arrest on Sunday, September 12, 2021.

The two, before becoming sworn enemies used to have a good relationship which saw Nana Agradaa usually paying reverence to the man of God.

A video of such moments is being recirculated on the internet following the recent altercation between the two.

Agradaa in the video which was taken when she visited Rev. Owusu Bempah in the early part of the year is heard praising the man of God for his pastoral prowess while an elated Rev Owusu Bempah stood beside her beaming with smiles.

“Nana Agradaa I have come to visit the old man again. We are in 2021, happy new year. A good prophet is a prophet that is able to cause the wings of God to cover you when you run to his feet. Last year we went to Papa and he anointed us with oil, it has kept us and ushered us into a new year,” Agradaa said in the video which is now going viral.

The relationship between the two which has turned sour escalated after the repented fetish priestess dared the pastor to come for a face-off.

Some junior pastors of Reverend Owusu Bempah were seen in a viral video brandishing guns and threatening to deal with Agradaa.

Later the Owuwu Bempah and a group of men trooped to her residence to confront her.

Following the incident and the brandishing of weapons that characterized the storming of Agradaa’s residence, the Ghana Police Service picked up the Reverend Owusu Bempah and his junior pastors and put them before a court on Monday, September 13, 2021.

He was however granted bail on Wednesday, September 15, 2021