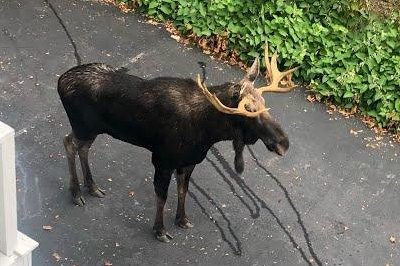 Sept. 16 (UPI) — A moose was safely relocated after wandering into a Massachusetts city, running into traffic and hitting a car.

Drivers in Worcester said they spotted the moose charging through traffic Wednesday morning.

“I look in my rearview, and there’s a moose that just literally ran right behind my car,” Casey Thomas told WBTS-TV. “I called 911 this morning and I was like, ‘Hey, there’s a moose, it looks freaking huge!'”

Dan Antonucci, a Worcester Department of Public Works employee, captured video of the moose running loose on May Street.

“He hit a car, spun around, got up and took right back off, started jumping fences. It was pretty wild,” Antonucci said. “He cracked the windows of the car and dented the door and made the car — the car almost went off the road.”

The Massachusetts Environmental Police tranquilized the moose and loaded it onto a truck for relocation. The animal was found to have a few bruises, but no serious injuries.

The environmental police said the moose was relocated to a safe location outside of the city.