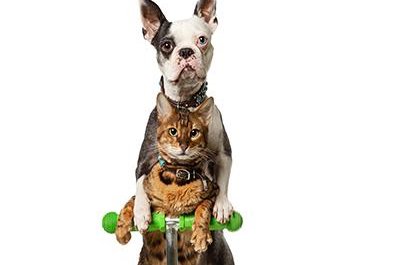 Sept. 16 (UPI) — A pair of Canadian pets with a unique hobby set a Guinness World Record for the fastest 5 meters on a scooter by a dog and cat.

Millett said she trained the animals separately to ride on a small scooter.

“Lollipop and Sashimi both enjoyed the scooter alone and it had never occurred to me that they would ride it together,” Millett told Guinness World Records.

She said the duo took their first tandem ride without her instruction.

“One day during practice, Lollipop was working on her scooter riding when Sashimi ran over to try and steal a turn,” Millett recalled. “Sashimi jumped on the scooter first, then Lollipop jumped on and started pushing her. We were shocked! They had made up this trick themselves! It is now my absolute favorite trick.”

Millett said the pair have now become famous locally for riding the scooter together.

“When Lollipop and Sashimi scoot together in public, the response can only be likened to a media frenzy over a celebrity. People gather, take videos. They create quite the stir,” she said.

Lollipop and Sashimi are now Guinness World Record holders after traveling a distance of 5 meters (16.4 feet) in 4.37 seconds.

I will sue whoever samples my songs – Cindy Thompson

You Are All Being Played