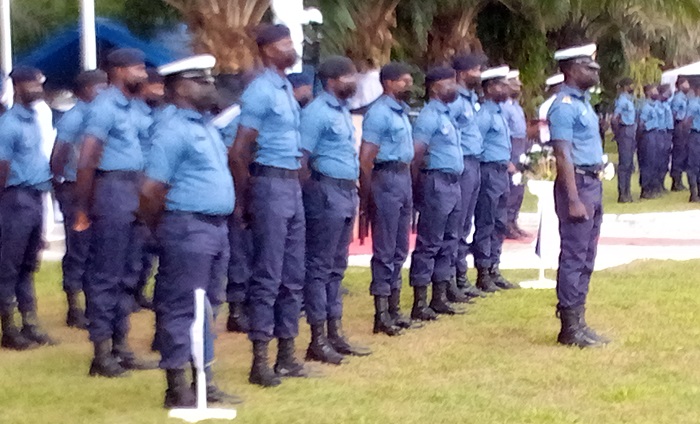 Some of the personnel who took part in the parade yesterday

The Chief of Naval Staff, Rear Admiral Issa Adam Yakubu, has bemoaned the fact that the West African sub-region is being confronted with issues of piracy, terrorism and religious extremism.

He said the piracy attacks, coupled with the recent recorded terrorist attacks in neighbouring countries, means that Ghana would have to rely on the Navy to defend the nation.

“This is the time to emulate the heroics of our departed sailors even if it involves paying the ultimate price,” he told the naval personnel.

The Chief of Naval Staff stated this in an address read on his behalf by Commodore Samuel Walker, Flag Officer Commanding, Western Naval Command, during the 2021 Ghana Navy Memorial Day Anniversary parade held at the Sekondi Naval Base on Tuesday.

The memorial service was to honour the brave naval personnel who lost their lives in active service particularly, those who paid the ultimate price during the peacekeeping operations in Liberia.

It was during this operation that one of Ghana Navy’s ships (GNS) YOGAGA, was attacked on September 14, 1990 by one of the factions involved in that brutal civil war.

The cost to the Navy in the ECOMOG intervention resulted in deaths, injuries and damages to Navy ships.

On Tuesday, some personnel of the Western Naval Command at the Sekondi Naval Base defied a heavy downpour to take part in a parade to mark the day.

“Since then, the Ghana Armed Forces has not relented in its quest for peace not only in the West African sub-region but the world over, as it continues to contribute troops to many troubled areas in the world,” he said, adding that “for us in service, remembrance days remind us of our covenant with the state and the people of Ghana that we are willing to pay the ultimate price for the peace and stability of this nation.”

“It is also a reminder of the ethos espoused by our predecessors so that we can be proud of the uniform we wear today as naval personnel,” he added.

He urged all naval personnel to continue to forge ahead with enthusiasm, loyalty, sacrifice and devotion, saying “it is only by so doing that the Ghana Navy can play its role effectively towards national development.”

“The sacrifices made by our heroes should motivate all of us to continue to work hard. High Command will continue to give recognition to hard work and dedication to duty,” he assured.

The Naval Chief commended the families of the departed personnel who have stood solidly behind the Ghana Navy over the years as the personnel continue to navigate through the stormy waters of their chosen profession.