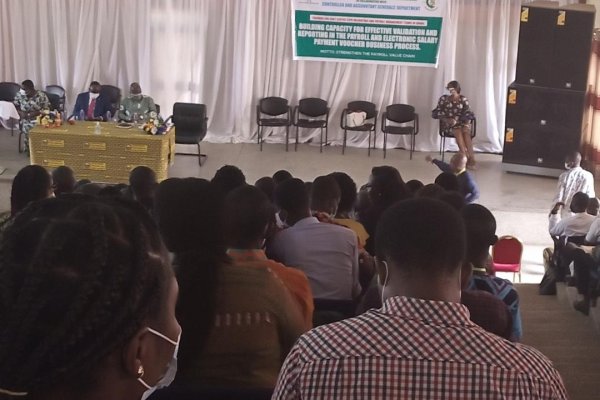 Takoradi Sept 16, GNA-The Acting Controller and Accountant General, Mr Kwasi Kwaning-Bosopem has stated that the introduction of Electronic Salary Payment System (ESPV) in 2013, has sanitized government payroll by reducing ghost workers on it.

He said the introduction of the ESPV has helped with the prompt removal from the payroll of retired employees, deceased staff and other staff who have vacated post.

Mr Kwaning-Bosopem said this at the opening of a two-day Regional payroll sensitization workshop for accountants, Human Resources managers, Administrators and Directors in the Western Region in Takoradi.

The training which is being sponsored by the Institute of Management and Entrepreneurship would among others, deepen the knowledge of Validators and bring to their attention identified attitudinal changes required to perfect the system.

It would also sensitize heads of MDAs/ MMDAs on payroll related issues, retrain users of the ESPV system and take feedback from MDAs /MMDAs.

Mr Kwaning-Bosopem said the Department observed that over the period since the system was in place, some Validators lacked understanding of the validation process, untrained Validators set up on the system, Validators approved staff not belonging to their management units and Validators using set up details of others to perform validation.

He entreated Heads of Departments to take ownership of their payrolls by using the system and taking steps to validate the payroll every month in line with the regulation 90 of the Public Financial Management Regulations , 2019 (L.I 2378)

He said the ESPV was one of the measures aimed at ensuring the integrity of Government Payroll for the prevention of payment of unearned salaries.

He said the Department had undertaken a number of initiatives and reforms aimed at enhancing its output as the gatekeeper and protector of the public purse and finances of state.

Mr Kwaning-Bosompem said CAGD had taken steps to retrain Validators across the Regions and to set up Heads of Management Units on the administrative system, adding that MMDAs would be trained and set up on the ESPV administrative system to manage payrolls at the local level.

He hinted that Third party Reference System (TPRS), which was introduced by CAGD to effect deductions of Association and Credit Union dues and loans from employee salaries had recently been upgraded to make it more efficient.

He said the upgraded version would be rolled out in November this year.

According to him, employees would now be required to issue a mandate to the TPI, followed by a PIN to complete the transaction, loan advance forms would be digitized and there would be no need for guarantors’ signature, employee’s image would be loaded onto the system as a means of authenticating transaction.

He said the department was also in the process of linking the payroll system with the National Identification card system.

He tasked MMDAs to use the Ghana Integrated Financial and Management Information System (GIFMIS) to process their transactions to enable the CADG prepare the national accounts.

He said the mantra of “no validation no pay” still holds and all Heads of Management Units and HR staff must endeavour to complete their Validation on time to enable their staff to be paid at the end of the month.

The Regional Director CAGD, Mr Joseph Kweku Agyei called on the participants to take the training seriously to equip themselves to execute their mandate and prayed that it would help address the few challenges experienced with the implementation of the ESPV system.
GNA