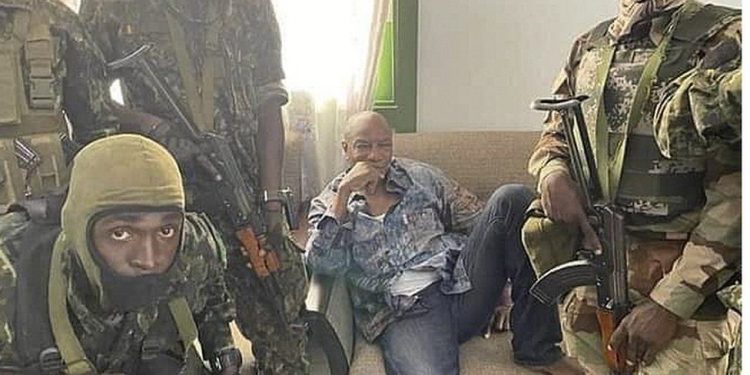 The ousted President of the Republic of Guinea, Alpha Condé, though currently in good health, is still in a state of shock after soldiers arrested him and dissolved his government in a coup d’état last week.

This was disclosed by the Chairperson of ECOWAS Council of Ministers and Ghana’s Minister for Foreign Affairs and Regional Integration, Shirley Ayorkor Botchwey, at a press briefing on Wednesday, September 15, 2021.

Madam Shirley Ayorkor Botchwey also announced that the high-level mission sent to Conakry, the capital of Guinea, to assess the situation will tomorrow [September 16, 2021] present its report at the extraordinary session of the ECOWAS Authority of Heads of State and Government to be held in Ghana.

She also added that they demanded the immediate and unconditional release of the ousted president and all others who were arrested as part of the coup.

Madam Ayorkor Botchwey said: “During the visit, the delegation met with Lt. Col. Mamady Doumbouya, the Chairman of the National Committee for Reconciliation and Development, and at our request spent some time with the ousted President of Guinea, H.E. Alpha Condé. We called for the unconditional release of the deposed president from custody, together with all others arrested during the coup.”

“Physically he looked very well, and we even went as far as talking to his doctor who ascertained that indeed he is very well physically but anybody who has gone through a traumatic experience will not be well mentally not to say that we found anything wrong with him, but he was still in a state of shock.”

About the Guinea coup

After gunfire in Guinea’s capital, a group of soldiers announced the dissolution of the constitution, the closure of the borders, and a nationwide curfew in a broadcast on state TV on Sunday evening [September 4, 2021].

The soldiers, led by a Special Forces Colonel, Mamady Doumbouya, had said regional governors had been replaced by military commanders and that Mr. Condé was under arrest.

The UN, African Union, and ECOWAS have condemned the coup and called for a return to civilian rule.

The coup in Guinea was the fourth attempted coup in West Africa in the last year with two military takeovers in Mali and a failed coup in Niger.