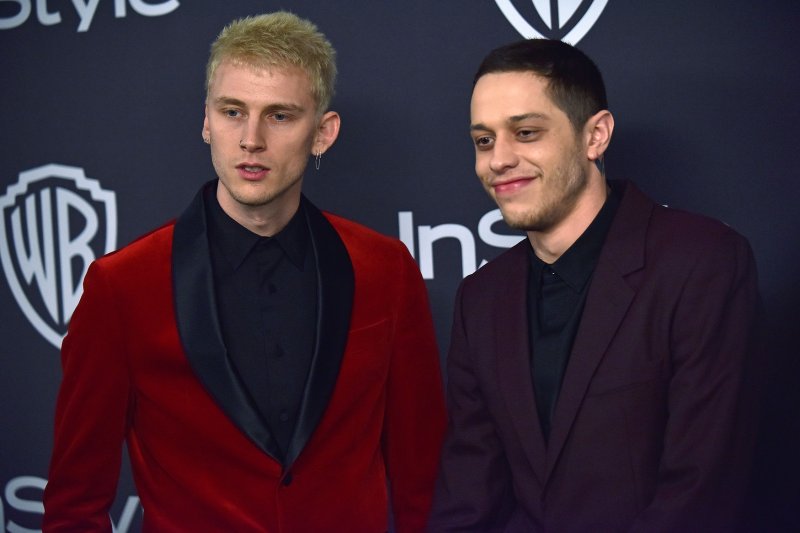 Sept. 14 (UPI) — Machine Gun Kelly is looking back on a “legendary” day with actor and comedians Pete Davidson and Dave Chappelle.

The 31-year-old singer and rapper said on Monday’s episode of Late Night with Seth Meyers that Chappelle, 48, once flew him and Davidson, 27, out to his house to smoke marijuana.

Kelly, Chappelle and Davidson reunited Sunday at Davidson’s 9/11 anniversary show. On Late Night, Kelly recalled how Davidson was previously planning to attend his show in Ohio when Chappelle offered to fly them both out to his home in Yellow Springs, Ohio.

“That was the first time me, Pete and Dave have been in a room since Dave flew me and Pete out to his house to — to smoke,” Kelly said. “And then he sent us back ’cause I had a show.”

“He found out Pete was going to Ohio for my show. Christmas show. And he was like, ‘Oh, you guys just got to come down and hang out,'” he added. “I’m like, ‘Oh, you’re like five hours away, driving.’ He’s like, ‘No worries. There’s a jet there waiting for you. You guys have to get on it.'”

Kelly said Chappelle left a big impression as he brought them to his “different man caves around the town.”

“We go there. And then — I don’t know if I can say all this,” Kelly said. “I mean, it was the most legendary — it certified Dave Chappelle as, like, the ultimate rock star to me.”

“Talib Kweli was in one [of the man caves]. We went to another place. It was the most random night,” he added. “We end up at his house. His wife was, like, furious that we were still there, like, ‘Get these idiots out of here.’ So he’s like, ‘Alright, you guys got to get back on the plane.'”

Before you judge Bob Risky make sure you are perfect