Today in History: God will not let me down 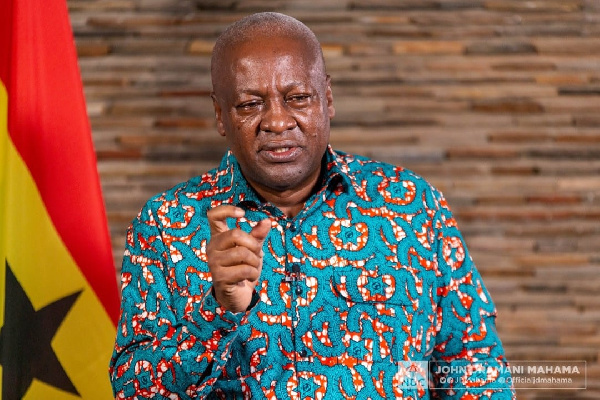 In September 2016, the flagbearer of the National Democratic Congress (NDC), John Dramani Mahama, said God will not disappoint him in the 2016 general elections.

He stated that his party has embarked on a lot of developmental projects in the country hence, his chance of winning the elections.

“God is on my side and has seen what I’m doing. He is also on our side. I have no doubt the National Democratic Congress (NDC) will win this election,” Mahama declared when he launched the 2016 Weija-Gbawe constituency campaign at Mallam Junction in Accra.

Read the full story originally published on September 15, 2016 by StarrFM.

President John Mahama is optimistic God will see him through the December 7 elections because he has done a lot to merit a second term.

“God is on my side and has seen what I’m doing. He is also on our side. I have no doubt the National Democratic Congress (NDC) will win this election,” Mahama declared when he launched the 2016 Weija-Gbawe constituency campaign at Mallam Junction on Wednesday.

“If there is any government in history that has faced many challenges… we have had market fires, mysterious fires, power crisis, we have had problems with our social and economic infrastructure and strikes upon strikes, but I have said that my God is able. The God who put me in this position will see me through all these challenges. God has not failed me and we have walked through all those challenges,” Mahama opined.

“The economy was in crisis. We had high deficit and inflation was going up but today in West Africa if you take away the CFA Franc the Cedi is most stable. God has been faithful to us and we thank Him and I know that He’s going to see us through. God’s favour and love is on Ghana.”

He added: “It is God who decides who He wants to give power to. If He says He won’t give you the power, you can go up or down, He won’t give it to you. We don’t need all-die-be-die or violence. On December 7 we’ll all go and cast our ballot and God will decide who He wants to lead Ghana in the next four years.”

Mahama, who is seeking a second term in office, appealed to NDC supporters to comport themselves before, during and after the polls as he faces off with main opposition leader Nana Akufo-Addo for the second time after the 2012 elections.

“Let’s not go into the elections with violence. Be peaceful and conduct yourselves diligently. We are a peaceful party,” Mahama appealed to the teeming crowd.