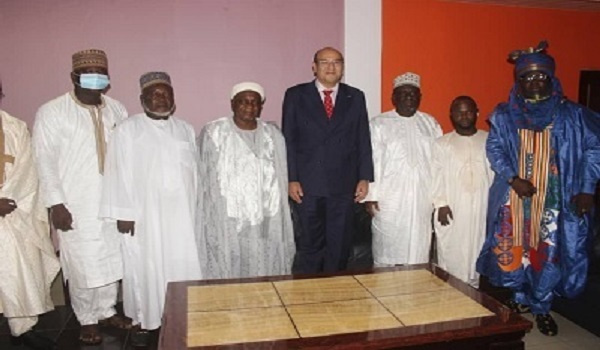 The Mexican Ambassador to Ghana, Enrique Ernesto Escorza Zamudio, last Thursday paid a courtesy call on the leadership of the Tijjaniya Muslims of Ghana and urged the Muslim community to take advantage of the business opportunities between the two countries to grow their businesses.

He said Mexico and Ghana had strong relationship and many bilateral agreements on trade, investment and education and urged the Muslim community to take advantage of the so many business opportunities between Ghana and Mexico.

He said the two countries had many things to learn from each other and to share in common.

The Ambassador said he felt humbled and privileged to meet important stakeholders and leaders of Muslims in Ghana after meeting the National Chief Imam last week.

Sheikh Haruna was excited about the visit of the ambassador and expressed his appreciation to the Ambassador for taking time off his busy schedules and paid a courtesy call on Tijjaniya Muslims, and expressed the readiness of the movement to explore and do business with their Mexican business community.

Alhaji Khuzaima Osman, the National Executive Secretary of Tijjaniya briefed the ambassador about the Sufi Sect and said Tijjaniya Muslims Movement of Ghana (TMMG) is the mainstream Sunni-Sufi Muslim family and the dominant Islamic body in Ghana, while Tijjaniya Sufi Order is the single largest Islamic body in Africa and the most tolerant Sufi fraternity in the world.

Alhaji Osman told the Ambassador that the movement was collaborating with institutions and NGOs in Ghana and abroad to empower the Muslim youth to acquire vocational skills to make them self-reliant and attain sustainable ventures.

The National Coordinator of Tijjaniya, Dr Ahmed Zakariya popularly known as Alhaji Ahmed Samson Kwakwa informed the Ambassador that Tijjaniya is focused on building schools and infrastructure for the development of the sect and general welfare of its members across the country.