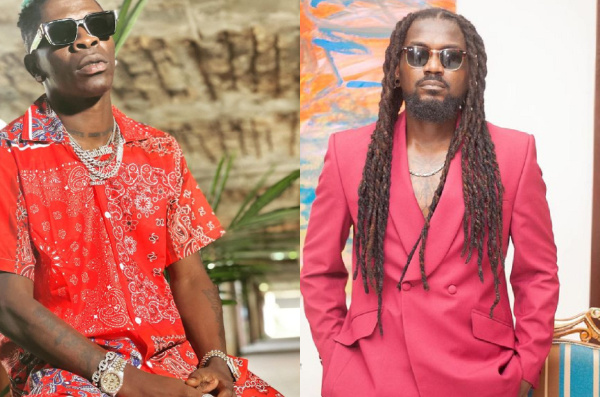 • According to him, Shatta Wale has been living a fake life

There seems to be a beef brewing between two of Ghana’s dancehall giants, Samini, and Shatta Wale as the former has called out the latter in a series of tweets.

Samini has tagged Shatta as a ‘fake’ artiste and also dared the African Dancehall King as he is affectionately called by his fans to release a single hit song.

The ‘Linda’ hitmaker promised to serve music lovers with 6 hit songs in a day if Shatta can pull off one hit song.

His comments suggest that the SM Boss has not been able to live up to his title as Africa’s Dancehall King, since he has not made a single hit song in a long while.

Samini did not cut corners as he called out Shatta Wale with his full chest by tagging him in tweets on Wednesday, September 15, 2021.

“Everyday daddy daddy daddy then you Dey take scam the big men. Dem see you oo @shattawaleghdem just Dey watch. You no see say some of dem stop Dey pay see you like ooo alo lo lo alo lo lo .,in your own voice to you drop a hit I dare you. Like I go drop 6 hits in a day,” he wrote.

In a separate tweet, he added that the ‘Melissa’ hitmaker enjoys tarnishing the hard-earned reputation of individuals in the music industry. Samini also noted that most of the awards Shatta Wale has grabbed were not based on merit.

“Life! You want to tarnish everyone’s image to elevate yours lol! tell them about your base awards and all the other fake behind closed doors accolades y’all take just to get closer to authentic legacies. Why didn’t you reject them mr FAKE revolutionary pah pah #bangerdrought.”

According to Samini, his colleague is an opportunist and revealed that despite bragging to be among Ghana’s richest musicians, the singer still goes about begging big men in the country for money and favours.

In a tweet sighted by Ghana, Samini wrote: “#yearoftruth we go face them squarely he go come talk say I’m poor meanwhile you no get money. Fanfool and beg beg and kiss ass vibes s))))…you ever see say I delete tweet or apologize to anyone for loose talk before? Lion status man. @shattawalegh. stop Dey fool.” 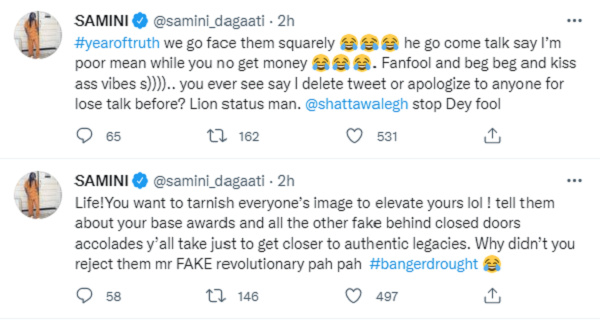