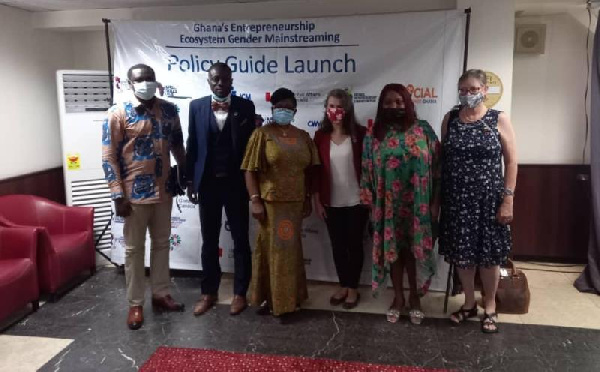 Some participants at the launch

The Africa Skills Hub (ASH), in collaboration with partners, Tuesday called for funding for a gender-specific education strategy to ensure enterprise growth and critical soft skills development for women to overcome socio-cultural barriers and norms.

Mr Daniel Antwi, the Executive Director of ASH, said there should always be a 50 per cent representation of women in decision-making at all levels.

At the launch of the Policy Guide on Ghana’s Entrepreneurship Ecosystem Gender Mainstreaming, he said: “More women must be involved in policymaking and their opinions must be considered.”

The overarching objective is to ensure that a gender mainstreaming component is inserted into any policy to ensure decent work and zero poverty for women and girls.

The Policy Guide will take into consideration the conditions and current barriers that the policies reinforce due to a lack of gender participation during its development.

He said the support needs of women were different hence the need to help them access finance for specific needs.

Mr Antwi said the Policy Guide was launched as part of a knowledge sharing and advocacy approach to address issues of women under the Women’s Entrepreneurship and Livelihoods Initiative implemented by the Hub, Canada World Youth, and Global Affairs Canada.

He said the document was geared towards decision-making around issues of gender in the entrepreneurship ecosystem, aimed at strengthening gender inclusion in entrepreneurship, which would have a trickling-down effect on resources that could be specifically targeted at women.

“The Policy Guide entails significant input from ecosystem practitioners and entrepreneurs on perceptions and insights about Gender Mainstreaming for Entrepreneurship Policymakers and Leaders,” he added.

Mr Antwi said it would support duty-bearers and Africa to revisit how they conduct gender work and implement engendered entrepreneurial policies that would lead Ghana into a more inclusive economic development and socio-cultural outcomes.

“It will serve as a guide for duty bearers in Africa to revisit how they carry out gender work and implement engendered entrepreneurial policies,” he said.

He said the government needed to further focus on programmes and partnerships that formally committed to and promoted the procurement of local goods, most of which would have been produced by the high proportion of women-owned businesses.

He said as part of the guide, they would establish a Committee to oversee and measure outcomes from the research and best practice policy guidelines on Gender Mainstreaming in Entrepreneurship to ensure economic development reforms over the next five years.

“Funding and support for this recommendation will ensure that the Gender Mainstreaming ecosystem is strengthened in Ghana and beyond,” he said.

Prof Margaret Ivy Amoakohene, a Member of the Council of State, said the Guide would ensure that gender mainstreaming was part of the decision-making and not just an add-on.

She said it would enable the State to take a critical look at the essential role economic empowerment played in the lives of women, children and other marginalised groups in society.

Prof Amoakohene said social enterprises had become necessary for implementing projects and given the under-representation of women at the heights of the entrepreneur’s ecosystem, there was the need for more women to act as owners of hubs, providing skills and playing other key roles.