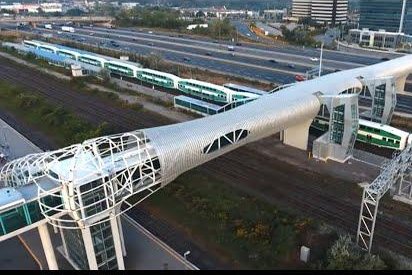 Sept. 15 (UPI) — An 820-foot bridge suspended over an Ontario highway was awarded a Guinness World Record as the world’s longest enclosed pedestrian bridge.

The Pickering pedestrian bridge, which was built by Metrolinx over Highway 401, was verified by Guinness as the world’s longest enclosed pedestrian bridge after it was officially measured at 820 feet long.

Metrolinx spokeswoman Anne Marie Aikins said the bridge was completed in September 2018 and the transit agency decided to apply for the Guinness World Record in 2020.

“We knew we had something special and we couldn’t find another one around the world that was the same length and that made us think we should see if it’s the longest, and sure enough, it is,” Aikins told CTV News.

Aikins said the process of applying for the record and getting approved by Guinness took over a year.

The bridge, which connects the Pickering Go Train station to the Pickering Town Center, stretches over 14 lanes of highway, six railway tracks and a city road.