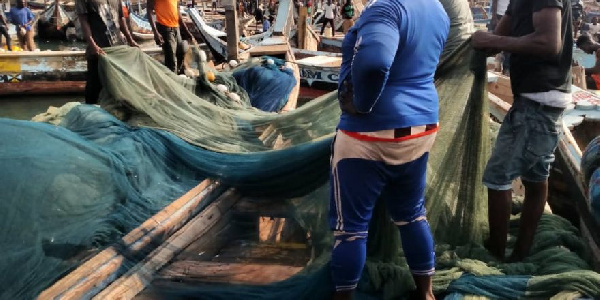 Speaking at a ceremony held at the Tema Habour, he noted that both marine fisheries and inland fisheries have been over explored.

The caution, when adhered to, will preserve the country’s marine stock, President Akufo-Addo indicated.

Read the full story originally published on July 31, 2018 by ClassFM.

President Nana Addo Dankwa Akufo-Addo says illegal fishing and the over-exploitation of Ghana’s marines resources must cease if the country is to preserve its marine stock.

According to Mr. Akufo-Addo, nearly all of Ghana’s Marine fisheries and inland fisheries have been over fished. This, he says is a disturbing development that ought to be stopped.

The president was speaking at a ceremony held at the Tema Harbour Thursday morning to welcome a Marine Research Vessel – R/V Fridtjof Nansen – which is making a port of call at Tema, as part of its pelagic survey off the Atlantic coast of Africa.

The vessel was built as part of the United Nations’ (UN) Food and Agriculture Organization (FAO) project and is jointly operated by the Institute of Marine Research (IMR) and the University of Bergen (UIB) to help developing countries improve their fisheries management.

In March 2013, Norwegian ship designer Skipsteknisk was awarded the contract to design the vessel under the designation ST-369. The construction contract was awarded to Spanish shipyard Astilleros Gondan in March 2014.

The new fishery and oceanographic research vessel was delivered in January 2017 and launched in May 2017.

It replaces an old vessel of the same name, which has been navigating the African coast since 1993, carrying out in-depth research in the marine ecosystems for the EAF-Nansen Project.

Dr Fridtjof Nansen was built according to ICES standards, which limits underwater radiated noise from research vessels. IMR and Skipsteknisk worked together on the specifications and drawings of the vessel.

The overall length of the vessel is 74.5m, molded breadth is 17.40m and length between perpendiculars is 66.10m.

To conduct marine research, the vessel is equipped with a spacious operation centre with offices and a library, a CTD lab with a 27m² CTD hangar and a 53m² main scientific hangar.