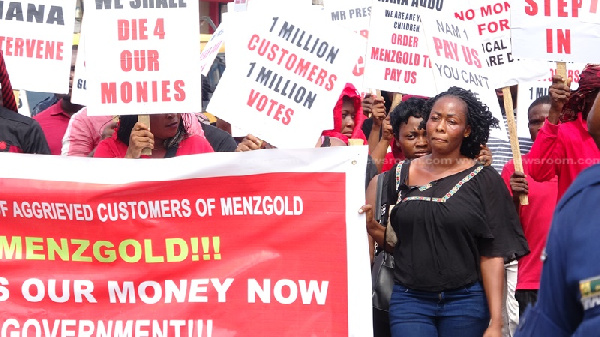 Three years ago, SEC shut down Menzgold for operating without a license

Members of the Coalition of Aggrieved Customers of Menzgold have called on Parliament to investigate the closure of Menzgold including the role played by the Securities and Exchanges Commission (SEC) and EOCO, as well as, the bank accounts of the CEO, board members of Menzgold and Brew marketing companies.

The customers also want the legislature to probe the whereabouts of some 400kilograms of gold assets.

Three years ago, the SEC shut down Menzgold for operating without a license.

The company was considered to be operating a Ponzi scheme.

Thousands of customers are still chasing their locked-up capital at the defunct gold dealership firm which promised the clients juicy monthly interest rates.

The customers of the company at a press conference in Accra today, Tuesday, 14 September 2021, said the shutdown of the company was “reckless, slapdash and unproductive”.

They said the authorities never sought to protect the ordinary Ghanaian customer and that the over one million Ghanaians who directly and indirectly were affected by this development are yet to see any remedy by the government or its agencies in assisting customers retrieve their locked up investments.

They said rather, the criminal prosecution of Nana Appiah Mensah, the CEO of Menzgold, has been dragging for so as long as the collapse of the company worsening the plight of the customers.

The customers want the country to treat the unresolved Menzgold matter as an “emergency national catastrophe.”

They have called on the government to work closely with parliament to find a lasting solution to their plight.