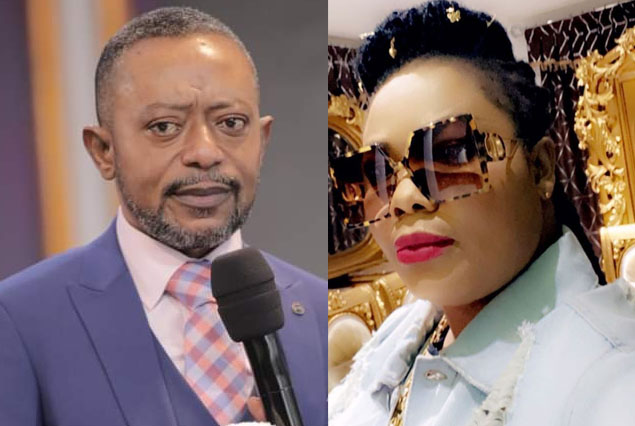 A Circuit Court in Accra yesterday remanded the General Overseer of Glorious Word Power Ministry International, Rev. Isaac Owusu-Bempah and four others into police custody for alleged threats of death.

Rev. Owusu-Bempah and the other four – Mensah Ofori, Michael Boateng, Frederick Ohene and Nathaniel Agyekum were yesterday hauled before the court on six counts of threats of deaths and assault.

The accused persons were arrested on Sunday during a church service at South Odorkor in Accra.

Ahead of the court appearance yesterday, the police had issued a statement saying that they arrested Rev. Owusu-Bempah and three others for attacking police officers at his church premises.

“The Head Pastor of the Glorious Word Power Ministries International, Reverend Isaac Owusu Bempah and three others have been arrested,” the statement signed by ACP Kwesi Ofori, Acting Director-General, Public Affairs of the Ghana Police Service, had said, adding that “the other three suspects are Michael Boateng, Frederick Ohene and Nathaniel Agyekum. Two other suspects are on the run and the Police are pursuing them.”

“The suspects are being detained for further investigations over the creation and circulation of multiple videos containing threats, the brandishing of a weapon and the assault of some Police personnel. After critically analysing the said videos and based on intelligence gathered, the Police embarked on an operation today, Sunday, September 12, 2021, at the premises of the church to arrest the suspects,” it said.

The statement added that “during the operation, some members of the church, believed to have been under the direction of Reverend Bempah assaulted some Police Officers. The injured personnel have received medical treatment and are responding to treatment. The suspects are currently in custody and will appear before court tomorrow, Monday, September 13, 2021.”

“The Police strongly cautions the public against any acts that will disturb the peace of the country. We wish to give the assurance that impartial investigations shall continue in this matter and the public will be duly updated,” it concluded.

Rev. Owusu-Bempah and his accomplices appeared before the court presided over by Her Honour Afia Owusua Appiah, and all pleaded not guilty.

Rev. Owusu-Bempah and Mensah Ofori have been charged with two counts of offensive conduct conducive to the breach of peace and threat of death while the remaining three were charged with assault on a public officer.

One other suspect in the matter is currently at large as police are making efforts to arrest him.

The appearance of Rev. Bempah saw a number of people, most of whom are members of his church, trooping to the premises of the court to show solidarity to the popular pastor.

He assured the court that they will appear before it to stand trial.

The application for bail was opposed by the prosecution led by Chief Inspector Dennis Terkpetey who argued that two of the police officers who were assaulted by some of the accused persons are still on admission at the hospital.

The judge in her ruling dismissed the application for bail to allow prosecution enough time to investigate the case since the accused were only arrested last Sunday.

She, therefore, remanded them into police custody and adjourned the matter to September 20, 2021 for them to reappear to stand trial.

Rev. Owusu-Bempah and some of his junior pastors have been having running battles with Okomfo Agradaa and her gang on social media for a long time.

The fight has become so intense that there have been accusations and counter accusations of threats and assaults amidst the brandishing of weapons.

Just recently on  September 12, Rev. Owusu-Bempah with a sizeable crowd, some on motorbikes, were captured on social media moving to Agradaa’s house reportedly located at Aplaku along the Kokrobite road and dared her to come out.

Per the video recordings, Rev. Owusu-Bempah was heard asking Agradaa to come out and make him vanish as she had threatened.

Agradaa could be seen from her balcony of what appeared to be a one-storey building, insulting Rev. Owusu-Bempah and his gang whilst doing a live video.

She then announced that the police had come to arrest Rev. Owusu-Bempah and some of the Rev’s followers were also heard insulting Agradaa back.

A policeman was seen approaching Rev. Owusu-Bempah who later said in another live video that the policeman had told him his boss needed him (Rev.) at the police station but he (Rev.) had told the policeman that he would only honour the invitation if they (police) bring in Agradaa first.

Earlier, a video had gone viral on social media in which two of the junior pastors of Rev. Owusu-Bempah were captured live brandishing a pistol and threatening to fish out Agradaa wherever she might be for always insulting their boss and gave her 24 hours to meet them.

One of them said, “In this country, Agradaa has the right to insult people at will on social media after which she will organise thugs to beat up those she has been attacking in addition. They have started their Mafia work. Agradaa knows what she has done.

“What we are doing here today is just to throw a challenge to Agradaa. She has arrogated to herself the right to insult people anyhow and additionally organise thugs to go out there and manhandle such persons. When they manhandle you they tell you it is because you insulted Agradaa that is why we are doing this to you.”

One of the men in yellow shirt, as captured in the video, threatened that they will find Agradaa wherever she was hiding the next day, saying, “You say you have land guards. I am throwing this challenge to you to get them ready because we are coming after you.

“There is nobody in Accra that we can’t face. We are saying enough is enough. You have insulted Rev. Owusu-Bempah for too long and we can’t let it continue. We shall stop you within 24 hours. Show us where you said you want to pounce on Rev. Owusu-Bempah. We are ready to meet you. Otherwise wherever you may be walking you must be extra careful. We shall come after you. Ghana cannot contain all of us.”

He also said “you say we don’t have power. No police, I repeat, no police, no soldier can stop us, I swear to God! You hire thugs to beat up people and then surround yourself with land guards.”

“Show us where to meet you so that you can attack Rev. Owusu-Bempah as you have threatened. We are giving you 24 hours to carry out your threat. We don’t issue empty threats.”

One lady, who is also a church member, joined in the course of the live video and dared Agradaa to meet her for a ‘woman to woman’ fight.

The man who did the introduction and gave the yellow shirted man the platform then came in again and said, “We shall not insult you. We are coming after you within 24 hours.”

He said that a lady he called Funchi who is based in the Middle East who has also been ‘firing’ on social media was beaten mercilessly recently, and according to him, it was Agradaa who hired thugs to beat up the lady when she arrived in Ghana and was cooling off in Kumasi.

The men then threatened to burn down the house of Agradaa’s backer called Amankrado, domiciled in the United States, at Akyem Sekyere in the Eastern Region.

The man then brandished a foreign pistol and said, “Look at this. We have a licensed weapon. We shall meet you. You insult everybody and nothing happens to you but when it is against you, then you hire thugs to beat up people. You did the same thing to Appiah Biblical and got away with it but this time around it is going to be a different story altogether.”

Emmanuel Toku scores for Botev Plovdiv in win against Beroe