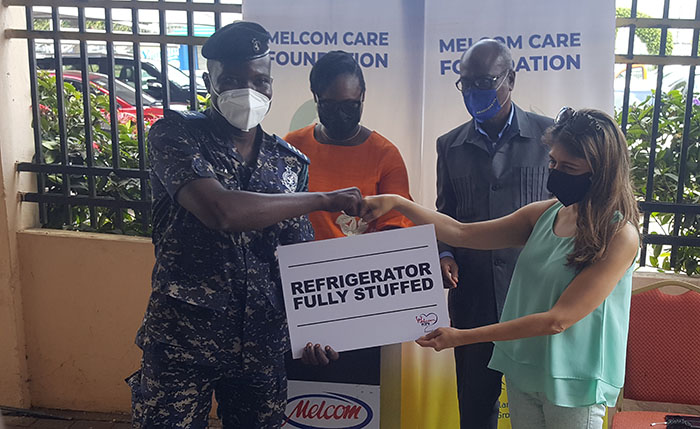 Sonya Sadhwani, Group Director, Melcom, presenting voucher of the refrigerator to inspector Theophilus Anang and behind them are DSP Efia Tenge and Godwin Avenorgbo

Inspector Theophilus Ayi Anang, a police officer with the Counseling Unit of the Ghana Police Service, has been honoured by Melcom Group of Companies for dedicating himself to the needs of personnel affected by calamities.

He was presented with a new double door refrigerator fully stocked with assorted beverages.

The outstanding officer was spotted in a police bulletin “Police Diary” edited by DSP Efia Tenge, now the Volta Regional Police Public Relations Officer. He has been described in the feature as “a man with a golden heart.”

At a short presentation ceremony held at the Head Office of Melcom Group of Companies, Mr. Godwin Avenorgbo, Director of Communications of the company, said if uniform personnel will devote themselves to providing service in favour of public safety and security, Ghana’s claim to be a peaceful nation would be given a boost.

“As a flourishing business enterprise in Ghana, we believe that peace and security are two essential ingredients among others which would serve as motivation for increased investment with its benefits at the national level in terms of service delivery, convenient shopping, affordable goods and services, increasing employment for qualified Ghanaian youth among others.”

Mr. Avenorgbo maintained that Melcom Care Foundation has taken keen interest in supporting the Accra Regional Police Command in the initiative it had taken to recognise the Accra city police officer who has won the vote of confidence in policing.

DSP Efia Tenge, Volta Regional Police PRO, described Inspector Anang as “the restorer of hope and a fountain of happiness” who always seek the welfare of personnel.”

She said Inspector Theophilus Ayi Anang has indisputable passion for what he does and derives a sense of satisfaction in putting smiles on the faces personnel in unfortunate circumstances.

“He would visit affected personnel to console and pay medical expenses on behalf of the Welfare Steering committee.

She said, Inspector Anang willingly attended the funeral of personnel and pay his respect to the bereaved in a regimental way.

Adding that, “Inspector Anang carried his duty with love and affection until his appointment as coordinator of the National Welfare Steering Committee by the then director general in charge of Welfare, COP Maame Yaw Tiwaa Addo Danquah in 2019.”