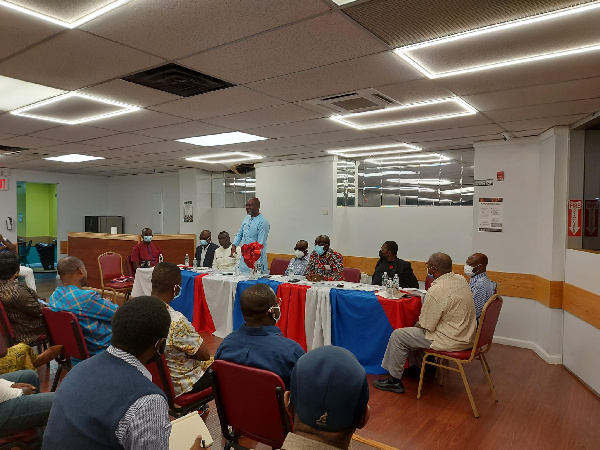 The Assin Central Member of Parliament (MP), Hon. Kennedy Ohene Agyapong has charged Ghanaians to rally behind the NPP government led by President Akufo-Addo in a vision to lift the country to a different development level.

According to him, in less than two terms, the NPP government has performed far better in transforming the economy than the immediate past NDC administration which spent more than 16 years in office.

He was addressing an extraordinary general meeting in Bronx, New York on Saturday, September 11, 2021, organised by the New York Chapter of the New Patriotic Party (NPP) and Ghanaians living within the city and beyond, thronged to the venue to witness the event.

He highlighted the unprecedented introduction of the Free Senior High School programme by the government which has helped to quadruple students’ intake at the senior high school level.

Hon. Agyapong bemoaned a situation in the past where only the rich could afford secondary education in Ghana. He recalled that there were many brilliant students whose lives have been disoriented because their parents could not afford to send them to secondary schools.

But today, every basic school student who passes the examinations, regardless of their financial status, goes to SHS free without having to pay anything.

This he said would help produce the needed human resource needed to advance the course of Ghana.

The issue of consolidation of the banks to sanitise the financial sector and get rid of non-performing banks also came up. Hon. Agyapong underscored how difficult exercise but necessary it was in strengthening the banking sector against unforeseeable shocks to depositors.

He reminded them that, many of the banks that were collapsed, existed on paper but their books were nothing to write home about. He cited instances to indicate a situation where depositors went for their money but were told to go and come later. The reason was that some of the directors and managers of these banks had diverted funds belonging to the financial institutions into their own personal businesses.

The government upon investigations realised the need to consolidate some of them in order to save depositors and to restore confidence in the banking sector.

He also touched on the security situation of the country and explained how the government has foiled many potential attacks based on intelligence by the security agencies but did not want to publicly reveal the details of the architecture for obvious reasons.

Hon. Agyapong, who also happens to be the Chairman of the Security, Defence and Intelligence Committee in Parliament of Ghana, told the gathering that, the Akufo-Addo government has resourced and retooled the security agencies to equip them to protect the country both internally and externally.

A lot of accoutrements ranging from vehicles, helicopters, fire tenders and many others have been provided to the security agencies in quantities that have never happened before.