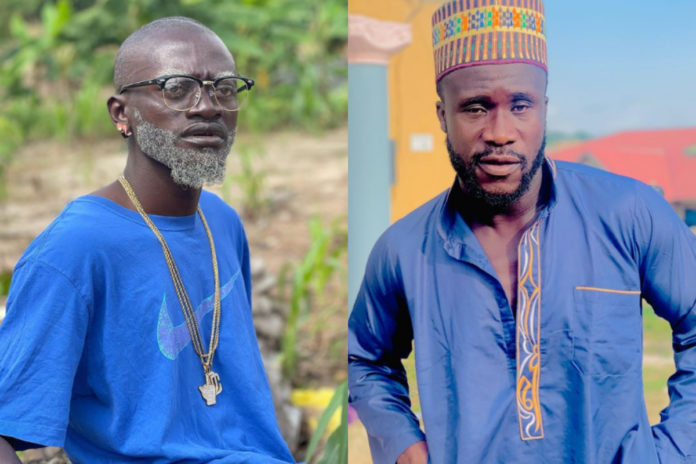 Kumawood star, Kwadwo Nkansah Lilwin has expressed his displeasure in how he is being compared to Ras Nene aka Dr. Likee.

READ ALSO: Rev. Owusu Bempah Allegedly Rushed To The Hospital After He Was Remanded Into Police Custody

Kwadwo Nksansah Lilwin is one of the best and most popular actor currently reigning in the movie industry. Ever since he emerged, he has introduced new styles and sensations in the Kumawood movie industry.

Dr. Likee on the other hand broke into the scene with a new sensation and has gradually earned the admiration of Ghanaians with his comedy skits.

In a recent interview with Zionfelis on the Uncut show, Lilwin revealed that there is no way Dr. Likee can be compared to him because he, Lilwin is a legend. According to him, Dr. Likee has managed to make a name for himself but will still need the assistance of legends like him to elevate him to higher heights.

He mentioned that Dr. Likee is famous for his comedy skits but he, Lilwin has featured in over 2,000 movies in Ghana, thus he can never be compared to him in any way.

In other news, undoubtedly one of the best rappers in the scene, Samuel Adu Frimpong, well known as Medikal is set to drop his next studio album dubbed “The Wolf” album.

The rapper who has entertained Ghanaians and maintained his relevance as one of the ‘Dope’ MCs in the rap game made this revelation on the microblogging platform, Twitter.

Over the years, AMG Medikal has never disappointed his fans when it comes to his craft. Although many have assumed that he has lost his rap skills on the account that he mostly does commercial songs, Medikal always manages to prove his doubters wrong with his extraordinary rap skills.