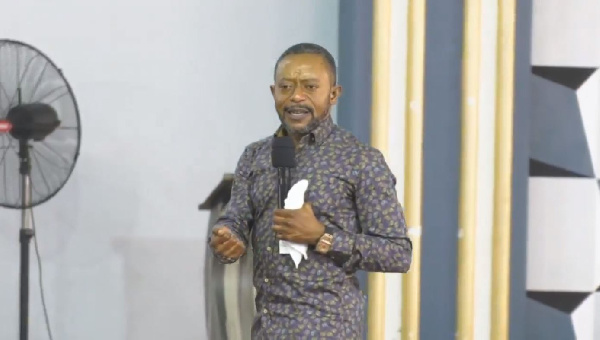 Details have emerged on how the Founder and Leader of the Glorious Word Power Ministries International, Rev. Dr. Isaac Owusu Bempah was arrested alongside three of his junior pastors by the Ghana Police Service on Sunday, September 12, 2021.

It has been revealed that the popular prophet was caged by the police after trailing the whereabouts of one of his pastors who was allegedly bundled into a waiting car by unknown men from the church premises to the Dansoman Police Station during church service on Sunday.

Giving the details, a journalist with the Despite Group, Ohene Nana Kwame Amoh who is also a pastor and conductor at the church said the prophet was on the podium delivering a prophecy to a man and his wife when he noticed an altercation at the church compound and decided to pause briefly to check what was going amiss outside.

“He was told that one of the pastors have been whisked away by plain-clothed men; so he told the other pastors to take charge of the services while he followed up to see where his junior pastor has been taken to; he later found out that he had been arrested by the police at Dansoman and later transferred to Central”, Kwame Amoh said.

The Ghana Police Service in a press statement last night reported that Rev. Owusu Bempah had been arrested alongside three of his junior pastors for the “creation and circulation of multiple videos containing threats, and the brandishing of a weapon and the assault of some police personnel”.

The statement issued and signed by the Acting Director of Public Affairs, ACP Kwesi Ofori they arrested the suspects “after critically analyzing the said videos and based on intelligence gathered”.

The prophet and the three other suspects, Michael Boateng, Frederick Ohene, and Nathaniel Agyekum, were taken to court today; two other suspects who were been pursued turned themselves into the police.

The police did not mention which particular videos based on which the arrests were made but videos suggestive, which are still viral on social media, show Rev. Owusu Bempah, some of his junior pastors and now “repented” fetish priestess, Patricia Asieduaa alias Nana Agradaa trading vitriol in different Facebook Live videos.

Meanwhile, an Accra Circuit Court denied bail to the Rev. Owusu Bempah and his four accomplices who have been charged with offensive conduct conducive to breach of peace, the threat of death, and assault of public officers.

They were remanded to police custody to reappear on Monday, September 20, 2021.