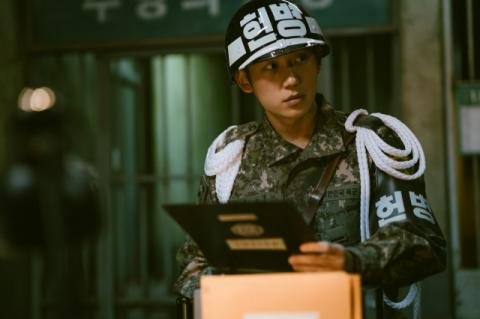 The series depicts the travails of the “Deserter Pursuit” team in the South Korean military, whose assignment is to capture army deserters.

The show was the most popular on Netflix charts for two weeks after its Aug. 27 premiere, according to FlixPatrol, which tracks streaming data. The series is based on a popular online comic written by Kim Bo-tong, who once worked as a D.P. soldier.

In online comments, viewers who completed their compulsory military service said they sympathized with the characters, who endure physical and verbal abuse in the barracks.

In South Korea, all healthy men older than 18 are required to serve in the military for at least 18 months under the Military Service Act, a mandate dating back over 60 years to the end of the Korean War.

“D.P. shows how to track down soldiers, who were forced to go AWOL because of inhumane violence and cruelty. It depicts a lack of discipline, violence and corruption, which are rampant in the South Korean military,” Meari stated.

North Korea increased its censorship of South Korean media last year, threatening to fine or jail anyone caught consuming it.

“I have interviewed so many North Korean defectors and have found that North Korean soldiers also suffer greatly. They don’t even have a proper food supply,” Seoul University of Foreign Studies politics Professor Son Tae-gyu told UPI News Korea. “Worse, they have to serve for a very long time.”

North Korean men are required to carry out military service for up to 10 years. In 2021, the National Intelligence Service, South Korea’s intelligence agency, reported to the National Assembly that the requirement was reduced by about two years.

Violence and abuse also appear to be pervasive in the North Korean army, according to a report by the Center for Military Human Rights Korea released in March.

The organization interviewed 30 North Korean defectors who served in the military, finding that most had experienced violence or abuse during their service.