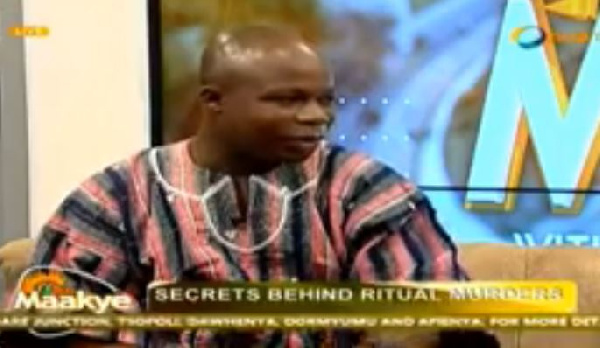 Pastor Felix Ansah was once a ritualist

• In one instance, he said he buried a heavily pregnant woman alive

A former ritualist, who is now a taxi driver, has been picked up by the police to assist in investigations after he made some claims of the numbers of people he has killed.

Felix Ansah, known in his former life as De.Gosty (which means a spiritual ghost), spoke with Captain Smart on Onua TV on September 2, 2021.

In that interview, he shared deep details about the way ritualists go about their trade and things they do to achieve success for their clients.

Now a repented person, Felix admitted on TV that he has been involved in the killings of a lot of women, including pregnant women.

It is such claims that prompted the Ghana Police Service to pick him up.

In the following narration, which is a question and answer between Captain Smart and Felix, he shares an instance in which he had to bury a heavily pregnant woman in the house of a politician, just to gain him success in an election.

The narration begins with a question from Captain Smart:

“Have you personally held a knife and killed someone before?”

“Captain, I would say yes.”

“You can’t put a figure to it because they are a lot. On your own as a fetish priest? Really? And so when you heard that people are being killed here and there, and that they’ve removed their heads, their legs, their tongues, their hands, they’ve opened up their stomachs, how did you feel?”

“Captain, now that I’ve repented and accepted Jesus Christ, I can be in my room and then when I see such things, I begin to cry. I can cry so much that my pastors and deacons are the ones who come to console me because Captain, there is this one thing that I always remember. I did some work for a prominent politician and a pregnant woman who was due in about a month or two, I had to bury the woman alive in his house.”

“The pregnant woman? You dug the ground and buried her alive?”

“Yes. Now, every December, I remember that thing and then I begin to cry.”

“Oh, I understand. We were about to hold elections? And did he win?”

“You say you buried the woman in the man’s house? Here in Accra?”

“So, how do you feel, that a pregnant woman, you bind her up…”

“No, I don’t bind them up. There is a way we go about it and just so that people will learn it, I will not demonstrate it. And in fact, for me, if I want something from you – maybe a body part, there is a way I go about it such that even after I get the body part, I can make it undetectable for the police when they even bring devices to check in the physical. So, there is no need to physically bind them; we have a way of doing it. And there is a way we bury the people.”

Watch the full interview below (Start watching from 1 hour 06 minutes):

Andre Ayew among 10 players to score this weekend