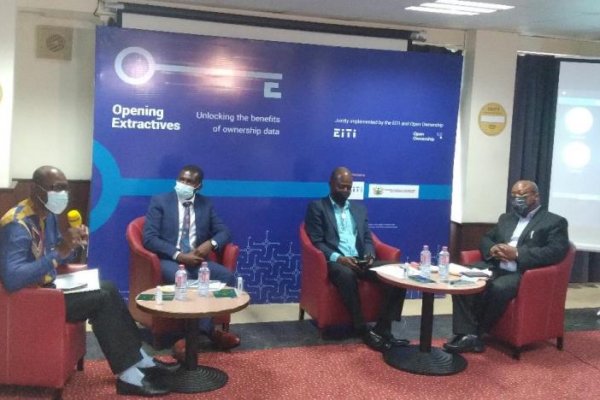 ghanammahttps://www.ghanamma.com
- Advertisement -
Accra, Sept. 14, GNA – As part of efforts to address corruption risks and enhance the business climate in the country, government has launched the Ghana Open Extractive Programme (OEP) in Accra.
The OEP aims to transform the availability and use of beneficial ownership information for effective governance in the extractive sector.
Mr John Kumah, the Deputy Minister of Finance, in a speech read for him, said, “Ghana joins eight other countries globally to pilot this programme with the collective aim of tackling corporate opacity”.
The other countries are Argentina, Indonesia, Liberia, Mexico, Mongolia, Nigeria, Philippines, and Zambia.
The OEP is a global programme funded by the BHP Foundation and jointly implemented by the Extractive Industries Transparency Initiative (EITI) and Open Ownership to advance beneficial ownership transparency.
He commended the International EITI Secretariat and Open Ownership for selecting Ghana as one of the countries to implement the OEP.
He said corporate anonymity remained the major obstacle in the fight against money laundering, corruption, and illicit financial flows.

He said the launch was a significant step in the government’s efforts to tackle corruption and increase domestic revenue mobilisation necessary to finance the Ghana Beyond Aid Agenda.
“We believe beneficial ownership transparency will enable Ghanaian citizens, CSOs, media, Municipal District Assemblies and competent authorities to know who exactly owns and controls companies and therefore be able to ‘follow the money’ and hold companies and individuals accountable,” he added.
The Deputy Minister said by reducing the scope of corruption, transparency of the beneficial owners of companies increased the chances that revenue from extractive projects would be used for development, rather than the enrichment of the few.
He said the beneficial ownership transparency also stands to benefit companies by supporting them with better data to perform their due diligence.
Mr Kumah said as the Government continued to prioritise improving investment climate, beneficial ownership transparency could help boost investor confidence in the ease of doing business in Ghana.
He said since Ghana made a public commitment during the 2016 London anti- corruption Summit, beneficial ownership agenda has gained increased political commitment across subsequent Governments.
“We have worked with national stakeholders and global partners to develop the requisite legal framework to institutionalise ownership disclosure,” he added.
He said Government in 2019 supported the Ministry of Justice and the Registrar-General’s Department for a new Companies’ Act, 2019 (Act 992) to be passed by Parliament with a view to enhancing ease of doing business and reducing opacity.
He expressed the hope that ‘we will be able to develop clear pathways to ensure that the central register is made publicly available by 2023 and continue to improve the quality and comprehensiveness of the data, as well as verify submissions.’
The Deputy Minister said sustaining political commitment would require facilitating inter-agency cooperation and multi-stakeholder engagement and that Government was committed to ensuring collective collaboration for impactful programme implementation.

She said it was therefore important to have a law to address various issues in respect to companies.
The Registrar General said the creation of the beneficial ownership register had resulted in the timely availability of beneficial ownership information for use in anti-corruption efforts.
“Beneficial ownership improves business transparency,” she added.
- Advertisement -
Share
Facebook
Twitter
Pinterest
WhatsApp
Previous articleI’ve Never Held 50K In My Hands In My 72-Years Of Living
Next articleDr Omane Boamah’s diagnosis of Black Stars problem
- Advertisement -