Dog-sized lizards are taking over the Southern United States 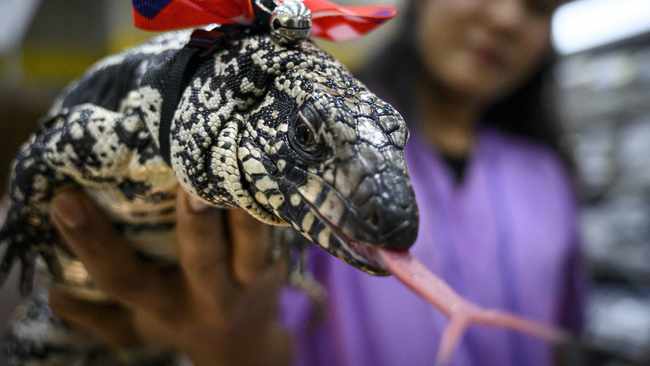 Hundreds protest over new Covid-19 pass to enter bars, restaurants in the Netherlands

Giant lizards the size of dogs are spreading in the southern United States. In what sounds like something from a 1970’s sci-fi horror flick, National Geographic reports: “The Argentine black-and-white tegu, a large lizard that can grow up to four feet (1.2m) in length, has already proliferated widely throughout South Florida”.

But it’s not just Florida. The environmental news publication EcoWatch reported: “Tegus first came to the region as escaped or released exotic pets and began to spread in South Florida more than a decade ago. But they are now reaching other states in the region and have been spotted in Georgia, South Carolina, Texas, Louisiana and Alabama.”

The state of Georgia’s Wildlife Resources Division says: “Growing up to 4 feet long and weighing 10 pounds (4.5kg) or more, this lizard, native to South America, is an invasive species that threatens Georgia wildlife.”

Like most large lizards, the tegu will eat almost anything, including eggs from the nests of ground-nesting birds, reptile eggs including alligator and tortoise, chicken eggs, fruit, vegetables, edible plants, pet food, carrion, grasshoppers and even small live animals such as young gopher tortoises, which are a protected species in the US.

“Tegus mature and reproduce quickly, though most concerning may be their preference for eggs and the potential impacts on our native ground-nesting birds like turkey and quail, as well as other species such as the state-endangered gopher tortoise,” says Andrew Grosse, a reptile expert with the South Carolina Department of Natural Resources.

Amy Yackel Adams, a biologist with the US Geological Survey, told National Geographic: “The entire south-east portion of the United States is at risk.”

Much of the region is prime habitat for the tegu lizard, with vast ranges, bountiful food sources and few natural predators.

The lizards are also threatening to spread exotic parasites to native wildlife and cause bacterial contamination of crops. Research shows that these reptiles, like most, carry salmonella.

Being an invasive species, the lizards are not protected under any US conservation laws. Georgia’s Wildlife Resources Division, the US Geological Survey and Georgia Southern University is trapping tegus, tracking sightings and assessing the population in high-risk areas or where sightings have been high.

The Geological Survey says another unwanted exotic pet and invasive reptile species has been decimating the Florida Everglades for decades.

“Non-native Burmese pythons have established a breeding population in South Florida and are one of the most concerning invasive species in the Everglades National Park.

“Pythons compete with native wildlife for food, which includes mammals, birds, and other reptiles. Severe mammal declines in the national park have been linked to Burmese pythons.”

Hundreds protest over new Covid-19 pass to enter bars, restaurants in the Netherlands