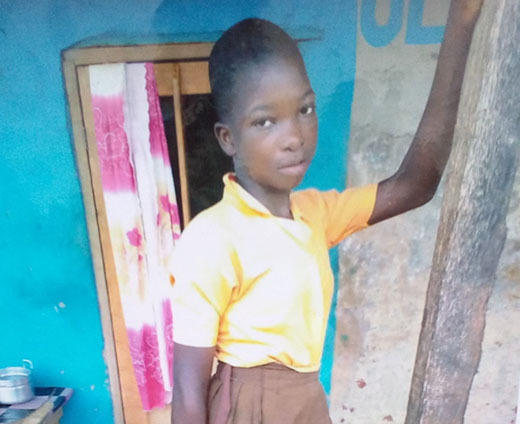 One of the victims

The driver of the Toyota Corolla car that killed four children – three on the spot and injured three others at Beposo in Wenchi District of Bono Region recently, appears to be walking a free man.

The families of victims of the accident have therefore appealed passionately to the Inspector General of Police (IGP) and the National Road Safety Commission to come to their aid to enable them to get justice because, according to them the case is going cold.

The gory accident which occurred on August 20, 2021, claimed the lives of four pupils and left three others with serious injuries.

According to them, since the unfortunate accident, the police in Techiman have not communicated to them apart from asking the injured children to go to Techiman MTTD charge office to write police statement.

“We understand the culprit (driver) was sent to court and granted bail without our knowledge,” Kwame Asumah, one of the parents of the deceased told DAILY GUIDE.

He said on August 20, at about 7: 30 pm, seven children from Beposo on the Techiman-Sunyani highway were walking on shoulders of the road to attend evening church service when they were knocked down by a speeding Toyota Corolla vehicle with registration number BA 20777-17, killing three of the children on the spot.

“One later died at the hospital bringing the total number of children killed to four. Three others also sustained injuries with one still on admission at Techiman Holy Family Hospital.”

The two discharged have been asked to go for medical attention at Tamale Regional Hospital every week.

According to them, the driver of the vehicle and other two occupants escaped after the accident but were later arrested at a nearby community called Nkraekrom.

The injured included Matilda Kissiwa, Ama Blessing, and Tiwaa Kasien who is still on admission at Holy Family Hospital.

According to the families, the car that killed the children belongs to a lotto agent and they do not understand why the driver is walking a free man.

They maintained since the police came and towed the accident car away in the night of the accident and later came for the bodies, families have never heard from the law enforcement agents again.

“When we went to the station to enquire, the CID handling the case name Sergeant Kyere only told us to bring the children to come and write statement,” Ellen Gyima, a family member of one of the victims confirmed.

The families are therefore, appealing to the IGP and all those who matter to come to their aid so that they get justice since they cannot independently follow the case.

- Advertisement -
Share
Facebook
Twitter
Pinterest
WhatsApp
Previous articleWhen Ronaldo and Ibrahimovic are still rocking in their prime at 36 and 39 respectively, former Chelsea player Demba Ba retires from football at 36
Next articleAkufo-Addo government is the biggest ‘sakawa’ in history – Mahama
- Advertisement -