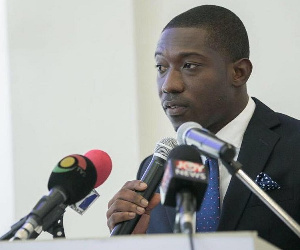 Data from the Ministry of Trade and Industry has shown that 106 factories have been created under the 1 District 1 Factory (1D1F) government policy since its inception in 2017.

The data also revealed that about 289,000 jobs had been created by the factories, of which about 150,000 are direct jobs created so far, and 139,000 indirect jobs created. Meanwhile, the total number of 1D1F projects that have passed through the ministry and are at different stages of completion is 275.

The Deputy Minister of Trade and Industry, Herbert Krapa, speaking to the data, said 60 per cent of the factories were new, starting from scratch, while 40 per cent were already existing factories that needed some revitalization or expansion.

He said aside from job creation, the 1D1F is a strategic initiative to boost the nation’s industrialization drive, which would go a long way to bolster GDP. Hence, the proposals of the factories go through a very thorough certification process with state agencies like the Food and Drugs Authority and the Ghana Standards Authority to ensure that their activities would match up to global standards, as the nation wants to take advantage of the available export markets.

We also do not want them to get complacent; that is why from the onset, the ministry and its consultants are ensuring that whatever you are producing is meeting the right certification and standards for the domestic and export market,” Mr Krapa told Accra-based station Asaase radio.

The initiative seeks to change the structure of the nation’s economy from one which is dependent on import and export of raw material to one which is focused on manufacturing, value addition and export of processed goods by processing raw materials found largely in the 275 districts of the country into finished or semi-finished goods.

The deputy minister also noted that when all factories are completed, over 280,000 direct jobs will be created in total.

The deputy minister added that the government is also in the process of developing industrial parks strategically across the country to woo investors.

“The lands are strategically located across the country and have been cited in areas that have unique resources. These parks would also have reliable amenities to support their operations,” he said.

He disclosed that in Tamale, the government earmarked 63 acres of undeveloped land for an Industrial Park; In Greater Kumasi, 5,000 acres of land have been secured, of which part is currently being developed under a Public-Private Partnership agreement.

Again, in Sekondi, he said, 2,035 acres of land have been secured; Appolonia City in Greater Accra has 2,385 acres of land that is being spearheaded by the private sector, but the government is helping with the location of some factories on the land.