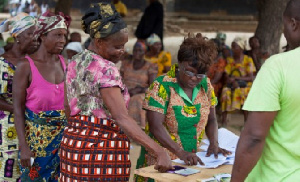 • The LEAP program has existed since 2008

• Send Ghana says, but for its intervention, some 30,000 households would have missed out on benefits

• They want government to commit more to the programme

The Deputy Country Director of Send Ghana, Dr. Emmanuel Ayifah has accused the government of denying some 30,000 households under the Livelihood Empowerment Against Poverty (LEAP) program their benefits.

According to him, Send Ghana has been unhappy with the government’s laid-back approach towards the release of funds for the programme.

He made this known while addressing a press conference in Accra today.

He stated that the government has shown little commitment, thus, endangering the sustainability of the program.

“We have called you here to express our resentment at the government’s lack of commitment in releasing funding for timely payment of grants to households depending on the Livelihood Empowerment Against Poverty program,” he said.

He recalled how in 2019, they had lumped pressure on the government until beneficiaries under the 60th and 61st cycle of LEAP were paid.

“You may recall that in November 2019, SEND Ghana addressed the media where he commended government for heeding our call to pay the 61st cycle LEAP grant after they were delayed. Indeed, in that, we realized some 30,000 households with over 125,000 beneficiaries were denied payment during the 60th cycle of the grant.

“And what happened was that government paid heed to our call and beneficiaries received double amount, that is for the 60th and then the 61st cycle payment,” he said.

He has, however, urged the government to pay more attention to the program to save it.

LEAP is Ghana’s flagship social protection programme that provides bi-monthly cash payments to extremely poor households in all districts of the country.

In addition to the cash transfer, LEAP offers free registration in the National Health Insurance Scheme.

LEAP started out as a 5-year piloting programme spanning from 2008 to 2012, but the escalating needs of the poor and vulnerable in society, coupled with the politically expedient nature of the programme has ensured the continuation of the programme