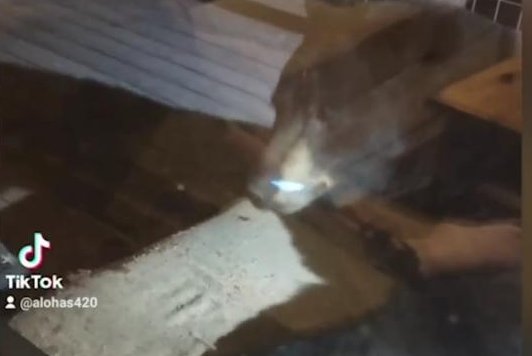 Another Maryland resident spots zebra on the loose

Sept. 13 (UPI) — A Colorado man who put a couch on his back deck for outdoor lounging said the furniture is no longer usable after becoming a nightly hangout spot for a local bear.

Chris Ward, of Steamboat Springs, said he put the couch out in the spring and soon found it was hosting a nightly visitor that was a bit less than gentle with the sofa.

Ward told KDVR-TV he is “pretty sure it’s the same bear, but we have several bears every night.”

Video of the bear’s nightly visits has proven popular on TikTok.

He said the bear has shredded the couch to the point where it is no longer usable for humans, but he will leave it out until the local bears go into hibernation for the winter. He said the couch will then be destined for the dump.

Ward said he has been careful not to leave any garbage or food outside to attract bears, and even brings his hummingbird feeder in every night. He said keeping the yard food-free has not stopped the nightly visits.

“I joke he broke out of a circus cause he’s so animated and not intimidating for as big as he is,” Ward said of the bear.

Jason Clay with Colorado Parks and Wildlife recommended homeowners do their best to haze bears they spot on their properties to prevent serious incidents from occurring.

“If you have a bear comes around your home take action. It’s the best for you and that bear, too,” Clay said.

He said air horns, car alarms and bear mace are the recommended ways to keep the animals away from a property.

Most Colorado bears are active from mid-March until early November. CPW recommends residents keep all potential food sources, including bird feeders, indoors during the active months.

Another Maryland resident spots zebra on the loose

Over population of Accra putting pressure on resources

Vaccine as a tool for immigration control is retrogressive – Akufo-Addo