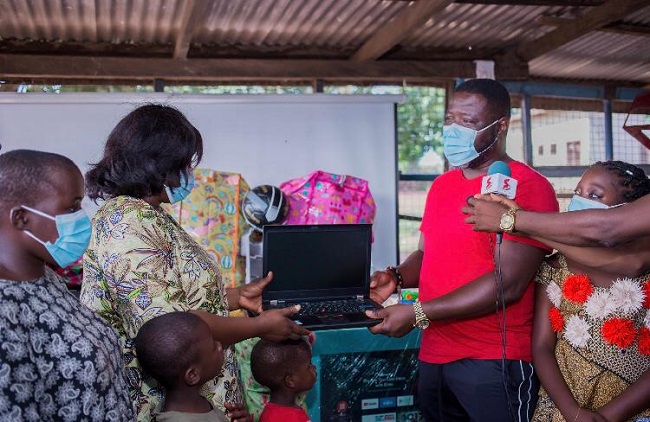 Some of the items donated to the Tamale Children’s Home are 43inch flat screen, street lights, sewing machine, Laptops, assorted drinks, food , clothes, toys among others.

According to him, he was motivated to support the home because he comes from Tamale and that he understands what vulnerable children go through.

He said giving back to the less privileged in society is the best thing to do and urged his colleagues who are abroad to remember where they come from and how they can contribute to the development of their people.

Hajji Adam thanked Dr. Renee Campbell Malti Naa and others for their contributions towards the project and appealed to the Tamale Children’s Home management to ensure that the children benefit from the support.

The US-based Ghanaian ,Hajj King Faisal Adam is from the Northern part of Ghana and has been supporting the Tamale Children’s Home since 2013.

Mrs. Janet Boahemaa Ansu, the manageress of the Tamale Children’s Home , thanked Hajji King Faisal Adam for the kind gesture and assured that the items will be used for the purpose for which it was donated.

She however lamented about the rampant practice of open defecation around the home which could cause an outbreak of cholera in the home.

“Currently we do not have fence wall which is disturbing us a lot because residents come in here and defecate morning , afternoon, evening so we are appealing for support to help us build a fence wall.”

Mrs. Ansu indicated that the home plans to build a social center for the children and appealed for support from government, organizations to help them undertake the project.

“We want to build a social center where the children will come together and performance Muslim or Christian prayers and other activities and so we are appealing for support.