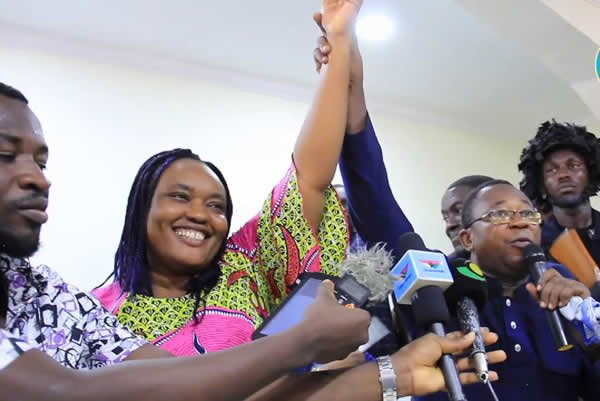 Tension is gradually brewing in Big Ada with the youth threatening to stage a massive demonstration over an alleged leaked MMDCE report in which it is believed that the Acting DCE has been recommended by the Dan Botwe Chaired Committee to the President to be re-nominated for the second term as DCE for Ada East District.

Information is that, on the evening of Friday, September 10, 2021, there was in circulation, a purported detailed report of the MMDCE Vetting Committee, which the majority of the youth in the Ada East District didn’t take lightly.

Most of them believe that, the committee, through the appointing authority; the President wants to impose the incumbent DCE, Sarah Pobee on them once again which they say will be chaotic.

Speaking to some executives of the NPP in the Ada Constituency, who pleaded anonymity, they spoke against the false recommendations in favor of the incumbent DCE, saying they as an executive body, have not written any letter in support of her.

“Somebody who doesn’t respect us, doesn’t attend meetings when invited and her actions bring the name of the Party into disrepute cannot be recommended by us”, one of the executives said.

Meanwhile, in a message to the Minister for Local Government and Rural Development, it was stated that the list in circulation on social media in relation to MMDCEs nominations with recommendations, which came with the nominee for Ada East District is very far from the truth and fact which makes people not to believe the authenticity of the document in circulation.

The message to the Minister indicated that the “O” level certificate or even SSS certificate of the Ada East District nominee is in serious doubt.

They also averred that the Chiefs, the Party Executives and Council of Elders are not in support of her leadership.

Making reference to the 2020 elections, the petitioners pointed out that nothing worked for the NPP in Ada under Sarah Pobee’s watch.

“Sarah even lost polls where she voted. It’s strange that someone posts such a write up as recommendations for Sarah Pobee. I pray this is not true hoping the President is not being misinformed if anything at all.”

The Paramount Chief of the Area, speaking on the sad event that occurred on Friday says he doesn’t want to believe that the several letters and correspondence he sent out to the President, regional and national vetting committee and minister for local government would be ignored.

“I don’t want to believe the report. The DCE has on several occasions disrespected the Traditional Authority. The people, particularly the youth and women are against her renomination. As a major stakeholder, I have consulted several opinion leaders and received petitions from my people. I will not allow what happened in 2017 to repeat itself where assembly members were attacked and beaten to confirm this same candidate.

According to the Paramount Chief, they cannot work with Sarah Pobee.

“It’s unfortunate, but we cannot work with her,” the Paramount Chief said. I want development in Ada. He continued that he will always protect the interest of his people.

Speaking to an assembly member, he said they will do everything to reject Sarah because from the beginning, she was imposed on them violently.  Moreover, we assembly members represent the people we will work with the voice of the people.

The Assemblyman questioned the NPP if they really love their party because almost everyone in the district is not in support of Sarah as DCE for a second term, and imposing her on Ada again will be chaotic. Nine months to bring back a candidate whose certificate is in doubt?

Whoever is misinforming the president must be called to order. “

This will be unacceptable. Mr President, please give us a fair hearing,” they said.

We want the leadership of the NPP led administration to understand that the people of Ada cannot be taken for granted “we will resist Sarah” angry youth speak.