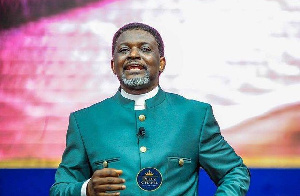 • West Africa has experienced a number of coups in this year

The Founder and leader of the Perez Chapel International, Bishop Charles Agyinasare, has placed the blame of political unrests happening in the West African sub-region at the footsteps of political leadership.

Speaking on the recent coup that took place in Guinea during his Sunday, September 12, 2021, service, the renowned pastor explained that such a coup should not give people in Ghana the wrong impression that a coup is also needed in the country to achieve development.

“Of late, there have been coup d’états in our sub-region. I want to clarify that in Ghana, we do not need a coup to make our nation work,” he said.

He explained that while at that, there is no running away from blame for the political class particularly because of how they distribute benefits.

Bishop Charles Agyinasare said that even though the political leadership in the country also shows that it listens to the plights of the people, it is not enough to recuse themselves from blame.

“When you study the cause of the coups in our sub-region, the political class is largely to blame. In Ghana, we don’t need a coup because our politicians sometimes listen to our complaints and uproars as a people. When we said there were too many ministers, they’ve cut it down. We cried that they cannot pay the 1st and the 2nd ladies, they listened. However, our political class should not give anyone the impression that they entered into politics to grab and chop,” he said.

Bishop Agyinasare has therefore called for fairness in the distribution of such things as remuneration for all workers in the country, squashing the idea that people in political authority are better placed for finer rewards than every other ordinary person.

“Unfortunately, if you increase your salary by 50%, and increase that of the ordinary worker by 4%, you are clearly telling the working class that you are better than they are. I think that it’s reasonable to say that either all get 4% or all get 50% plus,” he said.